Ultraman episode 12 "Cry of the Mummy"

Mummy Man (ミイラ人間 Mīraningen) was a revived ancient creature that attacked a research facility. His demise led to the summoning of Dodongo.

In a remote cave, a group of scientists discovered an ancient Mummy, that was at least 7,000 years old. Amazed by how well-preserved it was, the scientists looked forward to the secrets they might discover from examining the inhuman corpse. Soon, the Mummy reached the lab where he would be examined, with the Science Patrol watching over it. Strangely, as they watched, its eyes began to twitch. Later that night, as it was alone in the laboratory, the electrical devices in the lab were turned on, and the mummy’s eyes lit up as the voltage pumped into his body resurrected the centuries-old creature. The reanimated creature soon disposed of a guard by snapping his neck, then came across another guard, who managed to trigger an alarm before the Mummy killed him with electrical beams from his eyes. He later killed two more guards at a sewage plant and broke into it by breaking the locked steel doors with his bare hands as he attempted to return to his eternal rest in the canyon, causing the Science Patrol to be called in to deal with the ancient demon. Knowing the Mummy was in the plant, guards were posted everywhere. Guards soon chased the creature through the sewers, but they were told to take the creature alive. Soon, the monster was cornered in a building and guards attempted to subdue it, only to be thrown in all directions by its great strength. Finally, the Ancient Mummy used its electric beams on the guards, but was shot. Realizing he might soon die, he began emitting a terrible cry, awakening his guardian monster, Dodongo, to avenge him. Finally, a blast from Science Patrol member Arashi's Spider Shot downed the ancient terror, but his death resurrected his pet monster to avenge him.

Oddly in episode 7, a Mummy Man Spark Doll and several Kaiju are seen cheering for Ultraman Ginga as he fights Dark Galberos. 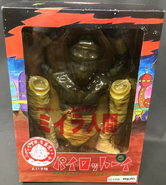 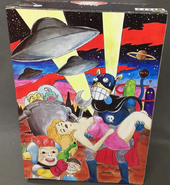 The corpse of the Mummy Man 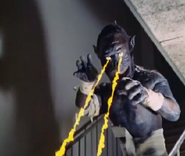 Mummy Man in the stage show 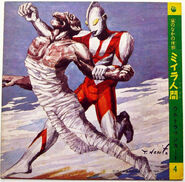 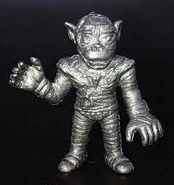