Mirrorman episode 4 "Terror of the Cobalt 60"

Mirrorman 2D
Multi (マルチ Maruchi) was a Kaiju that appeared frequently in the series Mirrorman as well as Mirror Fight.

The invaders set their sights one a cargo ship carrying the gamma emanating Cobalt 60 isotope. Multi was in charge of transporting this while the invaders committed attacks across the countryside to divert the SGM. Shortly after they saw through this ploy Multi was hit by a random driver in the middle of the night. He attempted to flee and briefly fought with Kyotaro, not knowing the driver picked up the suitcase with the Cobalt 60 isotope inside of it. The next day Multi managed to sneak into a hospital the driver and his girlfriend, Nobuko, happened to be in. As Kyotaro explained to them the dangers of the isotope, Multi briefly possessed Nobuko to grab it and bring it to him. Kyotaro followed, soon engaging the invader who created three clones of himself to keep possession of the isotope until an invader ship allowed Multi to turn into his monster form.

Multi chased Kyotaro, hopping around near the side of a lake where he used the water's reflection to become Mirrorman. Both giants tackled each other both on land and in the water. Once back on land the hero jumped high enough to hide in front of the sun before tackling Multi to the ground. Mirrorman then proceeded to used two Mirror Knives directly to Multi's head, finally killing him. Terror of the Cobalt 60

A second Multi, called Multi II, was sent by the Invaders to set off bombs around Japan to halt various projects using highly concentrated oxygen as the catalyst. One night he encountered two members of the SGM who fainted in their car. The Invader proceeded to drag the car into a cave before destroying a power station. The next day a large green kite was seen where it made two helicopters explode when they got near it. Kyotaro took pictures of the strange kit and as he developed them he noticed it had a strange dome on the back. The SGM believed the dome was an electromagnetic barrier and upon closer inspection of a picture it was revealed to be a space ship. That night the SGM managed to find the cave Multi II hid the car by following an oil trail. Upon spotting the team Multi II created a pair of clones to help him fight them. Before long only Kyotaro remained conscious and Multi II retracted his clones followed by a beam from the kite-like ship turned him into his monster form.

Kyotaro quickly transformed into Mirrorman to free the rest of the SGM followed by both him and the Invader growing giant sized after the kite-like ship fired a beam onto the cave. Both exchanged projectiles which did little to aid them in the fight. The Invader then used the magnetism in his hand beams to pull in Mirrorman only to receive a Mirror Eyebeam to the face. The hero then avoided more beams before tackling Multi II to the ground and throwing him. Multi II managed to then redirect the Mirror Knife back at Mirrorman, injuring him. Once the hero got up he managed to kill Multi II using the Slicer V and H to cut off his arms and head, respectively. Multi Appears Riding Upon a Kite

Multi appeared in episodes 7 and 13 of Mirror Fight. Stock footage of his fights in Mirrorman were reused in this series. 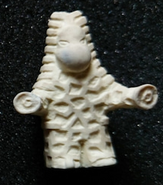 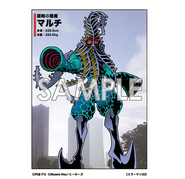 Multi as it appears in Mirrorman 2D
Community content is available under CC-BY-SA unless otherwise noted.
Advertisement