"I will turn this beautiful planet into a jewel that will shine forever."

Mulnau is an incredibly vain and unpleasant sorceress with a dark heart. She also has a twisted view regarding true beauty on the boot, believing the world is much more beautiful if everything in it is turned into crystals for all of eternity. While Mulnau proved herself more malicious than Juggler in some ways, she evidently lacks the latter's maturity, easily prone to childish tantrums when things don't go the way she wanted.

In the past, Ultraman Tregear met Mulnau on Planet Cobol. Mulnau accepted Tregear's offer to return her appearance to her youth and grant her powers to turn everything into a gem so they can shine forever. Afterward, she started collecting living beings by turning them into gems. Ultraman Taiga Novel: Tregear's Story／Blue Shadow

Chapter 2: 'I am the Galaxy's Migrating Bird' arc

As Gai embarks on his second mission to gather the four elements of the Orbcalibur, Mulnau met Gai on one of his journeys. A criminal wanted by the Interstellar Alliance, she was posing as a prophet at the space airport, telling people that the end is near, referring to her partner Dr. Jiggle's hologram-generated comet Balsas 6 (バルサス6 Barusasu 6), which was allegedly about to collide with Jewel Planet Cobol in a week. She was tracked down by Gai and his new partner Shorty, a pickpocket child he met at the space airport. The first time she is encountered, she escapes, but Gai finds out about her and Jiggle's plan, which was to capture the rich people of Planet Cobol, for reasons never explicitly stated. Gai tracks her down again and encounters a Dinosaur Tank, sent by Mulnau herself and Jiggle. After its defeat, the Interstellar Alliance arrests Jiggle but Mulnau escapes. However, Shorty stole a very important jewel from her that is the Element of Earth, which Gai installed into his Orbcalibur.

At some point, she was contacted by Ultraman Tregear, who stopped her ageing and granted her the power to crystallize objects. Ultraman Taiga Novel: Tregear's Story/Blue Shadow

Having captured the Ultra Warriors Ginga and Victory, she set her sight on the Earth and turned X into one of her jewel collections with the help of her minions. She sent a modified Galactron, that was able to turn things into jewels, to Hawaii, prompting Gai Kurenai to come back to Japan to investigate. She then uses the Bullton card to trap Gai in a dimensional warp, when he steps into her house-shaped spaceship.

Gai is alter captured by Alien Gapiya Sadeath, Alien Temperor Batista and Alien Hipporit Callisto, and Mulnau explains to him her motives of turning Earth into a crystal, and summoned Darebolic via the Dark Ring to do so. However, Jugglus Juggler betrays her and steals the Dark Ring, which he soon throws into a wormhole after fighting as Zeppandon. This results in Ginga, Victory and X's crystalization to be undone. In the ensuing battle, her spaceship is struck by Orb Trinity's Trinitium Shoot, which had bounced off Darebolic's barrier. Mulnau is mortally wounded and dies after talking to Gai once more. Trophy Room
Add a photo to this gallery

Mulnau, like Juggler, can use Kaiju Cards to awaken the respective monster. All of these were lost after she turned into a crystal. 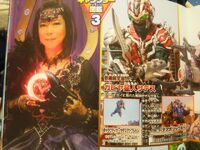 Mulnau's Tantrums over Seven's appearance
Add a photo to this gallery

Retrieved from "https://ultra.fandom.com/wiki/Mulnau?oldid=511866"
Community content is available under CC-BY-SA unless otherwise noted.