Ultraman Chronicle D
Mukkito (ムーキット Mūkitto) is a race of small and cuddly Kaiju from the series Ultraman Dyna, the first and only one to appear was named Hanejiro (ハネジロー, Hanejiro) by Super GUTS. He first appeared in episode 11, and left the show at the end of episode 47. After that, the Mukkito have appeared in many other sequels or just makes his appearance disguised as a toy.

Hanejiro was originally an animal worshiped by the Alien Fabiras as a god and bringer of good fortune and peace. However, due to the destruction of planet Fabiras, Hanejiro's kind, Mukkito, was almost completely wiped out. As Hanejiro and the Alien Fabiras drifted endlessly for a planet, they came across Planet Meranie. The Fabiras immediately sent out a research team, who took with them Hanejiro for good luck. However, the Fabiras did not realize that the planet had a biological weapon: Mons-Ahgar, stationed on it, and the research team was completely wiped out, besides Hanejiro, who fainted and was left alive by Mons-Ahgar, thinking it had died.

Later, when Super GUTS went to research Planet Meranie, Asuka and Nakajima encountered Hanejiro, he led them to the control room of the planet. The scheme was uncovered, and Mons-Ahgar was released. While Nakajima escaped, Asuka was trapped under stone and had his Lieflasher away where he cannot reach it. Hanejiro then gave the Lieflasher to Asuka, allowing him to transform. Later, after Ultraman Dyna defeated Mons-Ahgar, Hanejiro was trapped on the imploding planet and was rescued by Dyna and taken aboard the GUTS Eagle, where he was named the Super GUTS mascot and also renamed Hanejiro. The Phantom Shooting Star

Hanejiro was kidnapped by Prof. Otomo to the Zarina Zone for extraction of his knowledge genes and to implant them onto Prof. Otomo's Hyper Clone Monster: Neosaurus. However, the extraction was halted by Super GUTS and Prof. Otomo's Clone Silvergon attacked his research. While Hanejiro was rescued and still fainted, Otomo unleashed Neosaurus, who accidentally destroyed the research center and went wild, killing Otomo in the confusion. After Ultraman Dyna defeated Neosaurus, Hanejiro faked his death to joke with Asuka before being rescued. Battle! Monster Island

Hanejiro's people, the Alien Fabiras, became frustrated from their previous attempt to inhabit Planet Miranie and has decided to use force and take away Earth. However, due to Hanejiro's projection of the laughter he shared with the Earthlings, Alien Fabiras B learned that one cannot take back Laughter nor peace with force. However, Alien Fabiras A, under the influence of the Magical Stone from Planet Muzan, turned giant-sized and fought Ultraman Dyna, and Dyna was only able to defeat the giant after Hanejiro showed Dyna where the Magical Stone was. However, after the fight, Alien Fabiras B announced Hanejiro's decision: To be with the Fabiras again and help them endure their life of drifting. Farewell Hanejiro

Hanejiro returned to Earth in the form of an yellow egg, which fell into the hands of the bumbling Alien Meji Trio. The three, despite being villains, were very protective of him and protected him from prying eyes until Hanejiro returned to Super GUTS. After Dyna was defeated by One-Z, Hanejiro helped to destroy the menace by dropping Pudgy Garaon into the monster's brain case. Hanejiro was later taken away once again by the Alien Fabiras (off-screen). Ultraman Dyna: The Return of Hanejiro

A Hanejiro toy was on the shelf of a toy seller's store when Gamu from Ultraman Gaia's universe came and was accused by the store owner as a shoplifter before Gamu showed his face. Ultraman Tiga, Ultraman Dyna, & Ultraman Gaia: The Decisive Battle in Hyperspace

Hanejiro was seen as the companion of Hikari, the daughter of Daigo and Rena. Great Decisive Battle! The Super 8 Ultra Brothers

Hanejiro makes a sudden appearance in the recap series where he brought a friend and entered Marluru's house. Marluru found Hanejiro and attempted to catch the cuddly kaiju. Upon Deban's return from the store, Marluru accused Deban of bringing a pet into his house. When investigating the creature, Deban found out that it is Hanejiro. Deban told Marluru that Hanejiro is a mascot of Super GUTS. Not knowing of Super GUTS, Deban began to do a long talk about Hanejiro and Super GUTS. Afterward, Hanejiro said that he brought a friend. The friend was later revealed to be a creature Lunah under the name Moko. While Deban got excited to live with them, Marluru prevented and only allowed Hanejiro and Moko to stay for 2 weeks. Ultraman Chronicle D

Hanejiro was released once as a figure in Bandai's Ultra Monster Series. The figure was the one and only one in the entire UMS franchise to be made of fabric. They toys is relatively small compared to other figures of this line, being only 5 inches tall. However, this toy features the only folded tag in the 1998 line, with the other side being of Ultraman Dyna. This toy has plastic ears that can rotate and they are marked number 111. Hanejiro was also the only toy in the entire UMS series (excluding boxsets) to include a packaging: a plastic bag. 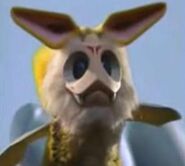 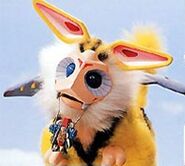