Ultraman Taro episode 26 "I Can Conquer Monsters Too!"

Mukadender (ムカデンダー Mukadendā) is a centipede-like Kaiju from the TV series, Ultraman Taro. It first appeared in episode 26.

Mukadender's name is derived from the Japanese word for centipede, Mukade (ムカデ, Mukade). In Japan, the word is most commonly used to refer to the red-headed centipede, Scolopendra subspinipes.

Awakening from hibernation in the middle of the woods, Mukadender immediately began to cause destruction and chaos during the midst of a festival being celebrated. One man attempted to fight the monster with a spear while the villagers were evacuating, and while he did keep the monster occupied long enough for everyone to escape, he was unable to do more than annoy the monster.

Mukadender then sprayed the man in webbing before launching flames from its maw, severely wounding him until ZAT arrived to rescue him. Mukadender continued its rampage as ZAT’s fighters assaulted the monster with their weapons, only for Mukadender to return fire with his flames. ZAT then used a chain to lasso the monster's head but Mukadender used his head separation ability to escape and resume using its flames on ZAT as it made it into town.

Mukadender then trapped Kotaro on a bell tower, after he shot it at point blank at its head the beast assaulted him further, trying to knock the tower down. Kotaro finally transformed into Ultraman Taro and the two finally went at each other. It seemed the fight was at a standstill, until Mukadender separated his head from its body to double team Taro continuously. However, Taro suddenly discovered a weakness: causing pain to Mukadender's head also causes pain to its body when it is separated. Using this to his advantage, Taro continuously attacked the head and hurled it into the sky, with its body being pulled along with it. Finally Ultraman Taro destroyed Mukadender's head with the Neo Strium Beam, as well as the body as it fell to the earth, ensuring its demise. I Can Conquer Monsters Too!

Mukadender reappeared in episodes 13 and 24 of the series, Ultraman Mebius.

In this series, Mukadender was hiding in the Woods and preying on humans in secrecy. As Marina of GUYS was on an outing with her friend as well as a woman they found in the forest, Mukadender revealed itself and chased them around the woods. Marina used Miclas to combat Mukadender, but his sheepish nature towards Marina only did little to help. Although striking Mukadender with one blast of electric energy, Miclas' timer went up, and Mukadender became enraged and attacked the trio without hesitation. GUYS soon arrived, with Mirai quickly turning into Ultraman Mebius. Mebius had little trouble fighting Mukadender until it separated his head from its body to double team Mebius. Mebius fought back, discovering Mukadender's connected weakness like Taro before him, until they joined together again. Mebius destroyed Mukadender's body with his Mebium Shoot, but the head escaped and tried to attack him from behind, but it was destroyed by Ultraman Hikari's Knight Shoot by surprise. Marina of the Wind

Some time later when Windom was upgraded into "Fire Windom", some holograms of past monsters were generated to test his new power. The first was Mukadender, who was quickly defeated by Fire Windom. The Resurrection of Yapool

After Saramandora was destroyed by GUYS three more monsters appeared out of nowhere with Mukadender being one of them. After some quick analyzing GUYS found out that the monsters were revived by a dark sphere like Alien Empera's and that it would destroy the Earth if it rammed into it. For GUYS to reach it they would first have to stop Mukadender from destroying a village. After some unleashing lasers and missiles on him Mukadender was destroyed and Fire Windom and Miclas were sent after Roberuga and Kelbim respectively. Ultraman Mebius Gaiden: Armored Darkness

Mukadender made a cameo appearance in episode 2 of the series Ultra Galaxy Mega Monster Battle.

While investigating the planet, the ZAP SPACY found the dead body of a Mukadender with massive claw marks on its head. At first, it was thought that Rei's Gomora had killed it, but it was later revealed to be actually Golza. The Fifth Crewman

When Rei transformed into Burst Mode for the first time, his Gomora gained a Reionic Burst form as well. Though unseen, Gomora had killed several monsters, one of them being Mukadender, since Rei couldn't control himself. A Reionics Alien Babarue ordered his Antlar to step on Captain Hyuga, but Rei and Gomora arrived, with the Ancient Monster carrying dead kaiju parts. Gomora threw Mukadender's part (presumably its neck) to Antlar first as they were about to fight.

Mukadender reappeared in the movie Mega Monster Battle: Ultra Galaxy Legends The Movie as one of Ultraman Belial's 100 Monster Army. He teamed up with Froguros, Gromite, Angross, Lunaticks, Jasyuline, Roberuga II, Alien Valky, Kelbim, Alien Pressure, and Birdon to take on Ultraman Mebius. He was also the first monster killed in the fight, by Ultraman Mebius's Mebium Slash. 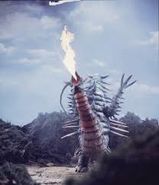 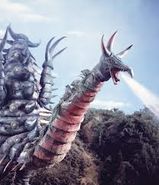 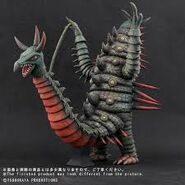 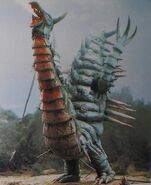 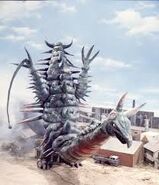 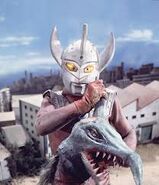 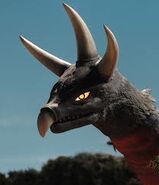 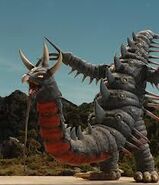 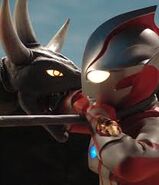 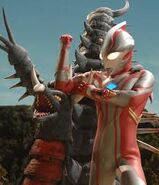 Mukadender in the Belial Army