None
Mugera (ムゲラ Mugera) is an alien introduced in Ultraman Cosmos. He first appeared in episode 45.

Mugera is a monster who lived at an amusement park. Whenever a kid saddened or having their belongings broken, Mugera always came to them by fixing their belongings and cheer them up. One of them is Ayano, an EYES operator. However, he cannot reveal his appearance to any adults and will vanishes. When the amusement park is about to be closed, a ship was sent to retrieve him a day later. However, JADF sees it as hostile and launches their attack. Cosmos appeared and stops the attack. The spaceship opens, revealing an amusement park and brought away Mugera. He bids farewell to everyone, even to the JADF soldiers as they happily witness this miraculous event. 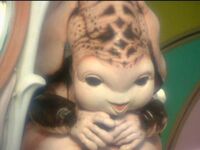 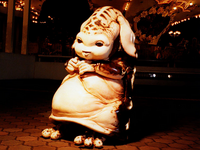