None
Mudon (ムードン Mūdon) is a Kaiju from the tokusatsu series, Ultraman Cosmos. She appeared in episode 11.

Small but violent tremors occurred at a drilling area which appeared to be Mudon waking up from a long sleep. EYES noticed the threat as well as Musashi Haruno. As the huge dinosaur skeleton like creature was about to stomp on several construction workers, Musashi transformed to Ultraman Cosmos and fought the monsters. EYES found out Mudon was acting crazy because they were holding Mudons child captive inside a cardboard cutout of a baby. They had to release the child or they would die from Mudons destruction. Ultraman Cosmos kept fighting Mudon. But luckily for EYES before Mudon could charge at Cosmos, they manage to make the child chirp at his mother stopping Mudon in her tracks. when she turned around and even though it was a decoy, Mudon realized it was her son. Deputy Shinobu watched in excitement and romance as they both reunited with each other. Cosmos used the realize ray to release the child out of the cutout. Mudon came in contact as she held the infants hand turning her to dust. 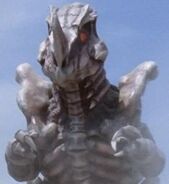