Ultraman Dyna episode 46 "The Power of Thinking of You"
Mozui (モズイ Mozui) is a historical-fictitious monster from the series, Ultraman Dyna. He appears in episode 22, cameo in episode 31, and finally reappears as a hallucination experienced by Ryo in episode 44 as part of the Phantom Monster Army.

Four centuries ago, the Soldiers of Tsukuyo sealed Mozui in the "Pond of Ice", and every time before they left for battle, the hailed Mozui as their protector, and concentrated their fear in a rock and then threw the rock into the "Pond of Ice", giving it to Mozui, who then consumed them. However, the soldiers realized that being fearless means being with a "soul", thus being donated to violence and destruction. Mozui was then sealed in another "Pond of Ice" and buried underground, never to be seen again. The Soldiers then disappeared as well.

Four centuries later, the "Pond" was rediscovered and opened, seeing that it was a mirror. However, if the moon was allowed to shine on the mirror, Mozui will be revived, as in text: "Do not touch. Mozui lies inside. If the moon hits upon the mirror surface, the curse will be broken, and Mozui will be free. Then, if a full moon hits to site of the original "Pond", Mozui will reappear as a giant monster and hail hell upon the world." Mozui was then revived, and the scientist, who happened to be Ryo's collague, started the alarm and copied the text on a floppy disk. Mozui pursued the scientist, until finally, when Ryo came, Mozui had apparently "murdered" the scientist. The secret of Mozui was out, and Super GUTS arrived on the scene of the original "Pond" to do battle. Asuka and Ryo was soon struck down. As Mozui went to take Ryo's life, Ultraman Dyna appeared. Since the moon was still high, Mozui attacked, beating Dyna senseless. Suddenly, the moon disappeared. Mozui, weakened, tried to flee, but was hit by Ryo with the XX-Blaster. Dyna regained the battle and finally finished Mozui with the Solgent Beam, making the monster explode. Soldier of Tsukuyo

Mozui reappeared as a member of the Phantom Monster Army, blocking the way of Ryo and Hirao to the Super GUTS headquarters. Mozui also seen taking the form of a giant antrophomorphic flying carrot Carrot Monster (にんじんの化け物 Ninjin no Bakemono).

While Ryo fired at "Mozui", her friend ran for protection but a white tulip that he picked earlier projected a younger Ryo and later a younger version of himself running towards "Mozui", causing him to bathed in light and disappeared with the little kid. The Power of Thinking of You

Mozui appearing in the original spot of the "Pond"

Mozui drooling the "Stones of Fear" 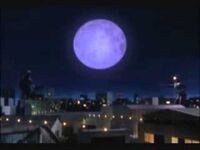 Mozui about to fight Dyna 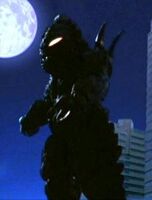 Add a photo to this gallery
Retrieved from "https://ultra.fandom.com/wiki/Mozui?oldid=527545"
Community content is available under CC-BY-SA unless otherwise noted.