Toshio Miyake
Mountain Gulliver 5 (マウンテンガリバー5号 Maunten Garibā Go-gō), abbreviated as MG-5, is a robot used by Super GUTS to combat a Space Pirate threat. However, the whole event was all a figment of Asuka's dream, and therefore the robot, presumably, isn't real.

Appearing in Asuka's dream, Mountain Gulliver 5 was a robot seeming placed and built by pre-GUTS member and now-TPC professor: Masami Horii. During Asuka and Mai's trip to Mars to pick up Nakajima's Spacium Gun, the base came under attack, and Mai was sent out in the Mountain Gulliver 5 to combat the forces, aided by several squadrons of GUTS Eagle Gamma and even the Space Pirate Ship Akebonomaru in all out space warfare. Eventually, Alien Reguran Captain Zoyaka lost his patience and sent out the "comet bomb", which shattered a large comet, creating large amounts of derbis that will crash onto Mars, as well as a larger chunk with a diameter of 3 kilometers that will seemingly obliterate Mars. Asuka called upon Ultraman Dyna to combat the Regulan airships while Mai used up her first shot on the Spacium Gun, blasting the comet. However, the shot was not enough and the Spacium Gun was destroyed. Mountain Gulliver 5 pulled back, and Ultraman Dyna alone tried to push the meteor back. Mountain Gulliver 5 later joined Dyna's cause but was called away by Asuka (in Dyna). However, Dyna was then struck unconscious by a meteor and was being shaken by Mai before Asuka (real world) woke up and realized that the rocket they were supposed to board has launched without them. 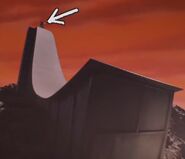 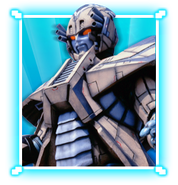 A puppet for MG-5, instead of the real suit, for stunt purposes.