Space (World of the Land of Light)

Late one night, after an attempted invasion by an unknown race to take the Earth's nutrients, a strange object fell from the sky, a large egg. A young boy happened to find it as it fell and soon, it hatched into a tiny reptilian creature before his eyes by the name of Mottokurreron. It seemed friendly enough, so he chose to keep it as a pet, feeding it. However, he didn't know how fast or large it would become. Motokureron soon grew too large for the boy to keep in his house, so he relocated the seemingly docile creature to a cave and continued feeding it, growing quite fond of it, as did Motokureron to him, but soon that would change when the growing monster grew into his towering adult form.

Now fully grown to Kaiju size, Motokureron destroyed a truck in the middle of the night to feed on the food it was transporting. When the boy returned the next day, he discovered the now massive Motokureron, who when it realized the boy had not brought food, became aggressive, seemingly trying to kill him. Soon, Motokureron wondered into town, destroying power lines and attracting the attention of ZAT, who attacked the space monster. Motokureron was only further enraged and returned defended himself, managing to down one of their jets by obscuring their vision with his green spray. The boy and his father, believing Motokureron to be an evil monster, set a trap with food from a shop and attempted to drive spears into it, only to be eaten by the monster. This prompted Kotaro to call upon the might of Ultraman Taro, who swiftly forced the beast to spit out the humans and battled it.

Taro seemed to have an upperhand until being struck by the creature's green spray, which weakened him and allowed Motokureron to knock him to the ground. However, instead of pressing its advantage, Motokureron returned to eating the food that had been used to trap it. Seeing the creature was only hungry and too large to find enough food, Taro rose to his feet and threw Motokureron into a giant vat and proceeded to force down on it, squeezing massive amounts of green fluid from the space monster till it had shrunk down to human size. The boy, now understanding Motokureron meant no harm, gave it sacks of food. Now docile and harmless once more, Taro allowed Motokureron to leave and tossed it into the air, where it flew off back into space from where it came. 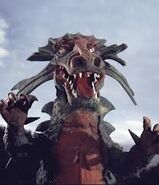 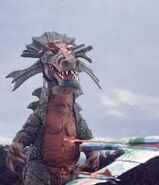 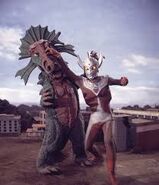 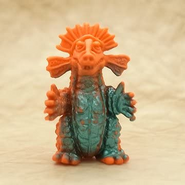