Akihiko Iguchi
Mother of Ultra (ウルトラの母 Urutora no Haha) is the commander of the Silver Cross Aid[1] (銀十字軍 Gin Jūji-gun), a medical relief unit for the Inter Galactic Defense Force. She is the mother of Taro, and her husband is the Father of Ultra. Her real name is Ultrawoman Marie (ウルトラウーマンマリー Urutoraūman Marī).

During the Ultimate Wars with Alien Empera, Ultrawoman Marie was the leader of the Silver Cross Aid, a medical group formed during the war. In the midst of Ultraman Ken and Ultraman Belial's confrontation against Alien Empera, Marie passed the Ultimate Blade to Ken, which helped him unleash his hidden power and drive Empera away by wounding him. Marie and Ken eventually married, and became known as Mother of Ultra and Father of Ultra respectively as the Inter Galactic Defense Force. Later on, Marie adopted Ultraman Ace, the son of her husband's deceased friend. During the events of the Revolt of Belial, Mother of Ultra was seen helping other Ultras and a young Zoffy. Unfortunately, Mother of Ultra was wounded during the event until Ken saved her from Belial but even then, Father of Ultra was defeated as well until Ultraman King arrives to seal Belial in a Space Prison. Mega Monster Battle: Ultra Galaxy Legends The Movie

At some point, Marie and Ken had a son named Taro.

Mother of Ultra is briefly seen at the end of episode 39 where she and Father of Ultra watch as Astra returns the Ultra Key back to the Land of Light to prevent it from colliding with Earth.

In Ultraman Mebius she transforms Hunter Knight Tsurugi back into Ultraman Hikari, saving his life after his battle with Bogarlmons. After Father of Ultra sensed a great threat, he expresses his concerns to Mother of Ultra.

Mother of Ultra also appeared in this movie, she was present with Father of Ultra and the Ultra Brothers and Zero to discuss the new issue. Later, when Zero decided to go, Mother of Ultra also gave Zero her light. Later, she was returning back to the Land of Light when the Ultras defeated Belial's army. Ultraman Zero The Movie: Super Deciding Fight! The Belial Galactic Empire

Mother of Ultra appears in episode 24 of the series along with Father of Ultra in the Land of Light when Belial was absorbing Ultraman King's Childhood Radiation using his Kei's Sturm Organ. The Fragments of Hope

Mother of Ultra reappeared in this movie alongside her husband, watching the Ultras and Ultimate Force Zero's battle against Gillvalis on Earth where she acknowledged Geed's growth as a young Ultra Warrior. Ultraman Geed The Movie: Connect the Wishes!

Following the emergence of Absolute Tartarus and his appearance against Zero and the Ultra Brothers, Mother of Ultra discussed the situation with her husband, her son, Zoffy and Ultraman 80. Knowing that this was a universe-threatening situation, Father of Ultra dispatched Zero to gather a team to combat the threat. The Divergence

When Taiga returned to the Land of Light following and order from Taro, the boy greeted his grandparents. Taro tried to reprimand him, telling him to call them by their titles in public, but the two of them did not mind Taiga's form of address. The Appearance

Piko, a young village boy, takes a bullet in the face and dies after valiantly trying to prevent the statue of a god from being stolen by thugs. On the Land of Light, Mother of Ultra sticks her hand into a box, and it emerges from the sky on Earth and takes the body of Piko away as his friends look on. Mother of Ultra then transforms and resurrects Piko into the white monkey god, Hanuman, to not only get revenge but also aid the Ultra Brothers in a battle against a revived army of monsters. The 6 Ultra Brothers vs. The Monster Army

Mother of Ultra's human form was called the Lady in Green (緑のおばさん Midori no Obasan), who first appeared in Ultraman Taro episode 1, meeting Kotaro and giving him the Ultra Badge. This form is modeled on Kotaro's deceased mother. She also appeared in the final episode, where Kotaro decided to separate from Ultraman Taro. Mother of Ultra retrieved the Ultra Badge and waved goodbye to Kotaro before leaving. 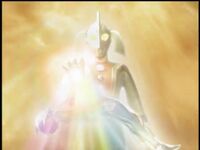 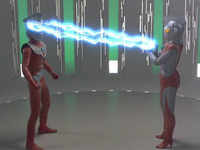 Mother of Ultra appeared with Jamila, Dada and Pigmon as fashion models for the clothing store Amzu Plaza in the city of Fukuoka, for the summer collection of 2014.

In the Ultraman Taro manga, by Getter Robo mangaka, Ken Ishikawa, Mother of Ultra takes on a radically different interpretation. She appears not as the silver and red Ultra person, she is most commonly known as, but manifests as a talking star. However, later manga chapters has her appear in her more familiar form, making it unclear for now whether this was her travel sphere, or a retcon as later chapter are more in line with the Television show than the earlier chapters and there are flashbacks of ancient Ultras.

At the start of the series, Mother sent two disguised Ultra Brothers to capture a kaiju hiding as a dog. When the beast went on its rampage, and nearly killed Kotaro and a young boy. They were saved when Mother contacted Kotaro in a limbo state, warning him of the coming age of monsters and transforming the young man into Ultraman Taro.

Later during Taro's final battle with the mutant Ken, she would appear again. With Ken's destruction, Mother would depart Earth with Taro to heal his injuries.

Mother of Ultra's action figure is the seventh figure in the Ultra Hero Series, but her figure is a special one as it is taller than other figures. Several ULTRA-ACTs have also been released throughout the years. A figure of her was also released as part of Ultra Hero 500.