Iron King episode 5 "The Duel in the Autumn Wind"

None
Monster Zorro (モンスターゾロ Monsutā Zoro) is a robot that appeared in episode 5 of the TV series, Iron King.

After casting down from the heavens, Monster Zorro was slammed into the Japanese landscape. Everyone thought the beast was a meteor, until it finally took form and showed that it was another robotic demon from the Ten Shadow’s creative minds. Springing to life, the metal beast charged after Goro and Gentaro. Seeking to avenge his four lost comrades, Shu Goro barked repeated orders to his machine as it took the Special Forces Gentaro for a ride. Noticing the danger, Goro transformed into Iron King and battled the robot monster. Easily outmaneuver the machine, it seemed that the hero was destined to win. However, the round robot suddenly began to heat up! The water within Iron King was quickly evaporated, forcing the guardian of the people into total retreat. Its targets lost, Monster Zorro marched away from the battle as the victor.

Some time passed before the dreaded machine was called out again. This time Iron King was ready as he karate chopped off all of Monster Zorro’s spikes, leaving the machine defenseless! However, once again it began to heat its body. Sensing the hero was about to fail again, Gentaro interfered. Using his powerful Iron Belt, he lashed out with its whip and decapitated the robot! Able to see its controller inside, Gentaro impaled him with his weapon, causing the immediate destruction of the wicked robot. 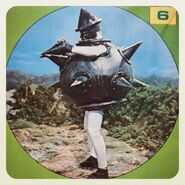