Monsarger (モンスアーガー Monsuaga), also known as Mons-Ahgar, is a Kaiju that first appeared in the TV series, Ultraman Dyna. He appeared in episodes 11 and 31.

Monsarger was a biological weapon created by a race of extinct aliens and kept in a blue capsule.These aliens kept their weapon of mass destruction on a comet by the name of Meranie. The aliens then used a few artificial engines to create the illusion of lush forests and pure air to lure other aliens in and eliminate them with Monsarger, thus creating an intergalactic war before being deceased. Monsarger was still kept on the comet when it traveled into the solar system, thus alerting TPC who then sent Super GUTS to investigate the comet in hopes of it being a refuge for mankind in the future. It was there that Asuka and Nakajima met Hanejiro and discovered the complicated mechanisms, still in use, that created the disguise. While Asuka and Nakajima were in that underground chamber, Ryo and Kariya discovers a plain filled with crashed UFOs. Suddenly, it all made sense. This disguise was spotted, and a mechanism released Monsarger. Monsarger then crashed the underground chamber, which traped Asuka. Nakajima, Ryo, and Kariya then returned to the GUTS Eagle and opened fire, but could not even dent the beast. Asuka was hit and was stuck under by a big rock which have even more big rock above it. Asuka dropped his Lieflasher and could get to it. Finaly, Asuka, with the help of Hanejiro, who pushed the Lieflasher with its mouth, transformed into Ultraman Dyna. As Dyna fought, he noticed that Hanejiro was pointing to a hologram Monsarger, pointing his weakness, his brain. With that notion, Dyna transformed into Strong Type and jumped into space. As Monsarger looked up, Dyna kicked fiercely downward, and shattered Monsarger's brain case. With his brain demolished, Monsarger fell and burned away. But special mechanisms inside him caused the comet to explode when Monsarger has been defeated, and so, the GUTS Eagle took off, and returned to Earth with Asuka and Hanejiro.

Monsarger Ⅱ (モンスアーガー二代目 Monsuāgā Nidaime) was a beast captured by Gregorl-Man on the fourth Meranie comet and was brought with him to Earth as a training target and to show Ultraman Dyna his power.

Monsarger Ⅱ is a biological weapon created by the exact same alien race on the fourth Meranie comet out of many. Monsarger Ⅱ came into the possession of the Gregorl-Man and had his weak point reinforced, making Monsarger almost completely invincible. Gregorl-Man sent Monsarger down via a dimensional vortex into Gregorl's match ring set on Earth. There, he was confronted by Gregorl-Man, disguised as Ultraman Dyna, and held up a fight. The imitator soon chops Monsarger's neck, showing Super GUTS his power in not needing to destroy the blue reigns of the kaiju's head. Then Monsarger fell to the ground, knocking it off and burned away. Fight! Dyna vs. Dyna 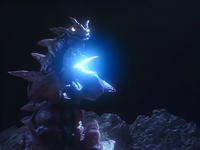 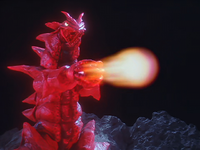 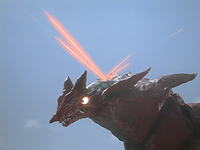 Head Case Modification
Add a photo to this gallery

Monsarger was released three times as an action figure by Bandai in their Ultra Monster Series. The first Monsarger was released in 1997 in conjunction with the release of his own episode. The figure (left on the photo) was made of red vinyl, but the droopy look of the eyes and the lack of detail made it a downer. However, the 2000 release would make the figure look better as it was more detailed and the eyes were not as "droopy" as before. The last release of the figure in the 2009 line was a huge improvement, as it now was made in mohagne vinyl (dark red, purple-ish). Detail-vise this figure improved all its predesscors lacked, but still did not fix the generations old problem of the weird pupil position, as all the Monsarger figures to date always had eyes that looked diagonally upward. The toys all measure 7 inches and a Monsarger II figure was never made nor released by Bandai or any other toy company to date. 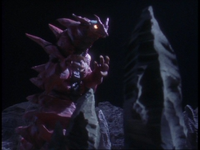 Monsarger awakens after being released from capsule. 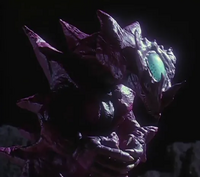 Monsarger waking up from slumber 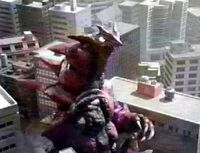 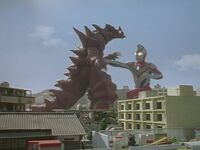 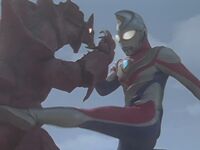 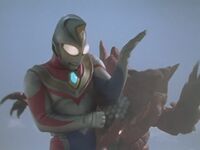 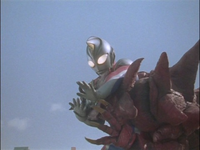 Add a photo to this gallery
Retrieved from "https://ultra.fandom.com/wiki/Monsarger?oldid=527548"
Community content is available under CC-BY-SA unless otherwise noted.