Mongula (モングラー Mongurā) is a Kaiju that appeared in the TV series, Ultra Q. He appeared in episode 8.

Working on making animals larger, Dr. Kimura's growth accelerator Honey Zelion was working perfectly. It turned ordinary bees into bird-sized insects, and the future uses for such a serum would be endless. As his fame came rapidly, his colleague Itami grew jealous and sabotaged the lab. A lone mole, attracted to the bee larvae, entered through broken glass and began to feed, thus ingesting the growth accelerator. Within days the mole was turned into Mongula, a gigantic mole beast.

Tunneling beneath the ground, the creature soon made its appearance to the world. It tore through the air and left a wake of destruction behind before vanishing once more. The self-defense forces were on the hunt and managed to locate and enter its underground tunnels. In order to make up for what he did, Itami stayed behind to blast dynamite on the beast. The blast failed to stop the beast and after the brave soul, wounded from his own attack, Mongula burst from the ground.

Tanks and rockets began to unload, pounding the mutation with firepower. As smoke cleared the air, the powerful rockets changed their target, aiming for the mountain behind it. Numerous explosives tore into the rock, bringing an avalanche down upon the mole. Following the dirt and rock, boiling lava began to flow. After the barrage, the kind Professor theorized that Mongula burrowed his way into the Earth's mantel, as the beast wasn't around when the smoke cleared. 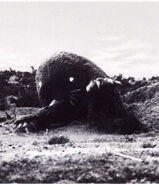 Mongula being attacked by the military 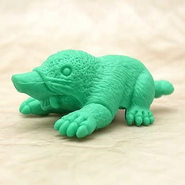