"Another one of those accursed wretches who killed Juda!? He'll pay, they will all pay! Once they've all beaten, our Gua Army will rule the universe!"

―Mold Spectre as he expressed his resentment for Ultramen

Unknown
Mold (モルド Morudo) was the eldest sibling of the Gua Trio, who together with Juda and Gina combine into their original form Gua. He is also one of the leaders of Gua Army. He was defeated by Andro Melos when he and his siblings formed Gua to combat the Andro Super Warrior.

Mold, along with his two siblings, served as main antagonists of the Andro Melos series.

Mold reappeared in Ultraman X as Mold Spectre (モルド・スペクター Morudo Supekutā). After Juda's death, Mold and Gina would later followed his path of being revived as ghosts and rebuilt the Gua Army.

Mold was first seen fighting Ultraman Victory in Shizukugaoka because he was mad at Victory for killing Juda, his brother. After confirming that her sister, Gina was ready, Mold grabbed Victory and left Victory's dimension, accidentally taking Arisa Sugita as well. Mold then soon joined Gina, with Alien Shaplay and Alien Magma in allegiance to her, in The World Where The Ultra Flare Occurred and then decided to avenge Juda then after Gina revealed the existence of an Ultraman in this universe, Mold revealed that he had captured Victory's host, Sho. Later on, Mold arrived in a valley and Gina summoned the Dark Thunder Energy from space to empower Mold right before Daichi transformed in Ultraman X to fight Mold as Sho, Arisa, and Asuna fought Gina.

When Mold overpowered X with his combat skills, X transformed into his Exceed X form to even the odds but even that form wasn't enough to counter the enormous energy Mold had in his possession and to make matters worse, Alien Magma changed his size to join in the fight and the two of them brought X down with slashes from their weapons. Fortunately help came in the form of Sho as after he got his Victory Lancer and fired an EX Red King bullet at the two so that X can retreat.

Soon Mold planned to gather the Gua Army from across the universe to come to Earth and bathe in the Dark Thunder Energy but before any of them can arrive, the Xio fired at Mold and Alien Magma before Daichi and Sho UltraLived in X and Victory to fight them again. After Victory fired at Magma with his King Joe Launcher and X landed an X Cross Chop on Mold, X transformed into Exceed X again and this time, Victory joined him as he transformed into Ultraman Victory Knight who dealt with Mold and Magma respectfully. After Victory finished off Magma, X weakened Mold with his Exceed Slash. Suddenly, Ultraman Ginga, who already defeated the Gua Army, appeared from the dimensional portal and launched his Ginga Fireballs at Mold and weakened Mold alongside Victory and X. After realizing that the odds were against him, Mold, Gina, and Shaplay decided to retreat for now with Mold furious over the fact that another Ultraman has come to thwart his plans.

As Mecha Gomora deals with Cyber Gomora and the ultra hosts dealt with Gina and Shaplay, Mold arrived at the Xio base and channeled his energy onto the Spark Dolls that Xio kept but the lab team set up a barrier which prevented Mold from channeling any more energy until he finally broke it after he absorbed the souls of his siblings, Juda and Gina onto his sword, and recreated Gua as Gua Spectre, at the cost of his own body being used as the villain's own vessel and fought the three Ultras until he was defeated once and for all with a combination of Exceed X's Xlugger Shot and Ginga Victory's Zepellion Ray.

Mold Spectre, alongside his brother Juda, were taken from the time of Andro Melos by Absolute Tartarus, thus avoiding their original demises at the hands of the Andro Super Warriors.

Following the recruitment of Ultraman Belial and Ultraman Tregear, the Gua Brothers were sent to Satellite Golgotha, where they were met by the 6 Ultra Brothers. Mold was engaged by Ultraman, Zoffy and Ultraman Jack, who swiftly managed to stagger him with the three's Spacium Beams. With the two brothers dazed, Taro absorbed his comrades, becoming Super Ultraman Taro and finishing the two off with the Cosmo Miracle Beam. The Divergence

Teleportation
Add a photo to this gallery
Mold Spectre 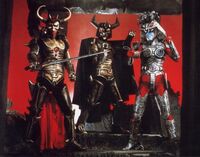 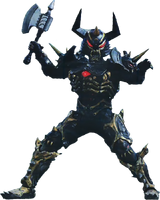 Retrieved from "https://ultra.fandom.com/wiki/Mold?oldid=534177"
Community content is available under CC-BY-SA unless otherwise noted.