Ultraman Gaia episode 48 "The Revenge of the Death God"

Mokian (モキアン Mokian) is the gigantic kaiju that served under the Deathbringer. It appeared in Ultraman Gaia, in episode forty-seven, "XIG Destroyed!?".

Mokian's design is based on an anglerfish, specifically the goosefish. During the design stages, a single eye was added onto the inside the mouth to make the kaiju more terrifying.

Deathbringer, an alien that inhabited Mokian and possibly the creator of Apatee and Alguros, sent Mokian to destroy XIG. The gigantic kaiju threatened to magnetically pull all of the landmass together with the power of the monopole, causing magma to rise and thus destroying the planet from within. The monopole, located inside the kaiju, was a theoretical object that was born through a big bang event, possessing only either a magnetic north or south pole.

XIG was fast to attack the kaiju, but the Aerial Base was moderately damaged in the process. Mokian continued its descent unaffected while XIG reluctantly decided to use their headquarters as a mass weapon. Gamu and the Commander temporarily stayed behind to finalize the controls. By generating a magnetic south monopole with the Repulsor Lift to attract Mokian's magnetic north monopole, Mokian was pulled to a safe altitude. However, the plan soon went awry when the Repulsor Lift, which was already damaged when Mokian attacked the ship, could not generate enough power. Soon thereafter, Mokian returned to its own course. As a last resort the Commander told PAL to set a ramming course on the kaiju, with himself and Gamu still on board.

Gamu quickly transformed into Ultraman Gaia to stop the Commander. The Ultra managed to destroy parts of the kaiju with his Quantum Stream, but the creature was too massive to be destroyed in a single attack. The mouth of Mokian opened up and revealed a single demonic orange eye. Alerted, Gaia prepared for his next attack. An orange energy ball was fired from the eye and Gaia was blasted away. Then, rods of tentacles sprung out of Mokian's fins and captured Gaia. Once held hostage, Gaia was tortured by great amounts of electricity. Mokian was once again bombarded by the Aerial Base and soon confronted it with even more attacks, crippling it.

Out of options and with the Repulsor Lift going critical, the Commander ordered PAL to ram the Aerial Base directly into Mokian. Both the Aerial Base and Mokian were destroyed, and the Commander was rescued by Gaia. Although Mokian was defeated, the Shinigami's plan to destroy XIG was ultimately successful. 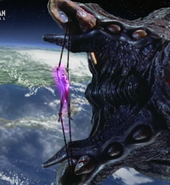 The Aerial Base on a collision course for Mokian 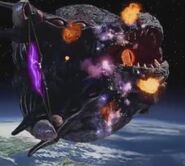