Everything seemed to be going well one sunny morning until Mogedon appeared from the surface of the Earth. Super GUTS attempted to attack him, but his jumping and burrowing were too quick for them to handle. However, after analyzing his body, Mogedon appeared to have a weak point of sorts in his neck. With the use of a single stinger missile, Ryo knocked out Mogedon cold. However, as a highly explosive alien device from Alien Chadabin was being retrieved out of his mouth, Mogedon awoke. Super GUTS quickly pinned him down with an electrical net, but he simply rechanneled it back towards the fighters. To prevent the situation from getting worse Shin turned into Ultraman Dyna and pinned Mogedon down right after he went into Strong Type. However, Mogedon managed to swipe Dyna off and tried to run away. After Mogedon sneezed out the retrieval team and the device, Dyna used the Cat Trick to stun the mole Kaiju and sent him into space. 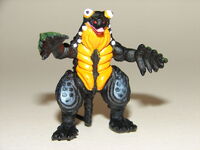 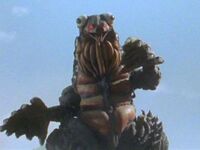 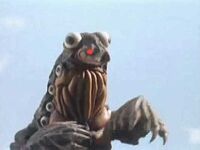 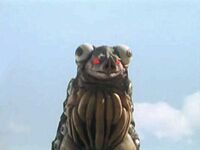 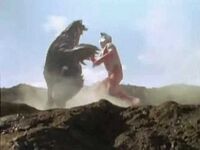 Add a photo to this gallery
Retrieved from "https://ultra.fandom.com/wiki/Mogedon?oldid=511783"
Community content is available under CC-BY-SA unless otherwise noted.