Between Earth and Moon

In Japan, it was a time of celebration known as "Mochi-Day". A holiday where everyone is happy to be alive and everyone eats rice cake. Kotaro Higashi decided to get in on the fun and make rice cakes along with the townsfolk of a nearby village. However, the day soon shifted into chaos, as Mochiron appeared from the moon being carried by an airship. As soon as the awkward-looking monster landed, it snatched up as many buckets full of rice cake and he ate them all up. The voracious monster then flew away and landed in another village that was celebrating the holiday only to eat up their cake as well. As so this continued on and on throughout the day with Mochiron constantly eating all the cake. ZAT however would stand for this and so they attacked the monster with missiles, only to anger the monster into landing and setting villages ablaze with his flames and his rolling ability. The monster’s rampage eventually continued on into the night and everyone was in lament as it seemed Mochi-Day was now ruined. At that moment, Kotaro was then greeted by Yuko Minami, the former female host of Ultraman Ace. She and Kotaro soon confronted the monster demanding to know why it’s attacking on the holiday. However the monster stated that he would leave and thus attacked Kotaro. Luckily, Kotaro was able to transform into Ultraman Taro and thus the two fought while Minami watched on. Although despite using his flames, Ultraman Taro was able to beat down Mochiron, but he didn't kill him. Someone was calling to him and it was none other than the Father of Ultra himself. Ultra Father broke up the battle between Taro and Mochiron and demanded Mochiron’s reasons for attacking. Mochiron finally admitted that he only came for the rice cakes that were being made for Mochi-Day. As a result, Ultraman Taro created a giant hammer and used Mochiron as a butter churn to create the rice cakes and even Minami joined him, ballooning into a giantess form and joining him in cakes. The next day, the holiday was restarted and re-celebrated due to Mochiron’s attack. Finally before the celebration could begin, Mochiron, stuffed from the Rice Cakes he ate last night was being carried away into the sky by Ultra Father and Minami and into space so that the festival could resume in peace.

Mochiron appeared in Ultraman Ginga as a Spark Doll. In episode 7, he along with several monsters are seen cheering Ginga on as he fights Dark Galberos. He can be seen later on in the series in his Spark Doll form in Dark Lugiel's collection along with Mecha Baltan, Alien Hipporit, Alien Babarue, Ghighi, Deathfacer, Ace Killer, Goldras, Birdon, Twin Tail, Gan-Q, Gatanothor, Dada, and a lot of other monsters and aliens. It is likely that Mochiron returned to space in his original form after Ultraman Ginga defeated Dark Lugiel.

Mochiron appeared in this second theater special. He was the thirteenth monster Ultlived by the Livepad. He was Ultlived by Misuzu Isurugi. He first played rock-paper-scissors with Alien Baltan and won. Later, Gan-Q and Alien Akumania showed up and began taunting the poor alien until Gomora came and defeated the two big-eyed monsters. Ultraman Ginga Theater Special: Ultra Monster ☆ Hero Battle Royale!

A figure of Mochiron was released as a figure by Yamanaya. It has a very show-accurate design, and it stands at approximately 9 inches in height.

In addition to this, Bandai also made a Gashapon mini-figure of Mochiron, standing at about 3 inches in height. Its design is show-accurate, and several of its parts (including the jaw, the stem on top, upper/lower body, and feet) can be pulled apart. Being a Gashapon, it has no rotatable parts.

In 2013, a figure of Mochiron was released as a part of the Ultra Monster 500 series by Bandai. The figure has a very accurate design, and it stands at 5 inches in height and has two rotatable limbs. He is #22 in the series. 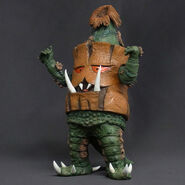 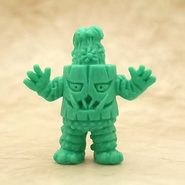 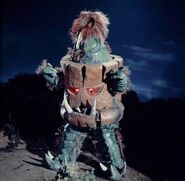 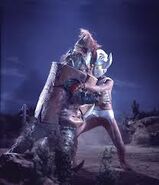 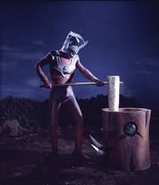 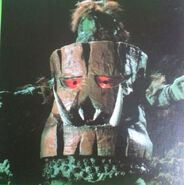 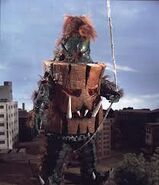 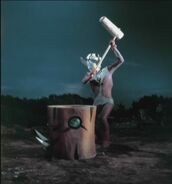