Ultraman Gaia episode 51 "Earth is Ultraman's Star"
Mizunoeno Dragon (ミズノエノリュウ Mizunoeno Ryū) is a monster that appeared in the TV series, Ultraman Gaia. He appeared in episodes 11, 50, and 51.

In a park one sunny day a dragon head statue spoke to the mind of a woman named Miyumi. She was given a message that the Dragon Of The Waters would come to attack and tried to tell KCB only for them to not take it seriously. According to Miyumi the dragon's name is Mizunoeno Dragon and was at one time the ruler of what was now modern day Tokyo. Minutes afterwards several blue serpentine dragons appeared in water systems around the city, starting panics and traffic jams. XIG's computers picked it up just seconds later after they appeared. Once the source of the dragons was found, XIG sent Team Hercules to the scene. As Team Hercules made its way into the sewer system the clouds darkened and gathered around the city, giving it a creepy green color to it. Team Hercules makes it to the source where they find a pool of water with jagged rocks and where three dragons made themselves known. The two creatures exchanged projectiles, but once Team Hercules used it's Ultimate Napalm victory seemed certain. A few Missile Grenades were launched to seal the entrance to the dragons' lair, hoping it would end their reign of terror for good, but they were wrong. Mizunoeno Dragon made his true face known and once Team Hercules made a futile attempt to assault his face the water dragon Kaiju used a couple forehead flashes to blast them to the surface. Once the creature created fountains of red water Gamu turned into Ultraman Gaia to fight him. Gaia was easily out matched in close quarters as the Mizunoeno Dragon proved his weight and tails were too much to handle. Gaia used a Quantum Stream only for it to have little effect and as he was about to use a Photon Edge, the Mizunoeno Dragon's tails fired electric bolts from their tails, bringing him down. As Gaia recovered the hydra Kaiju held him in the air defenseless. Team Hercules tried to use Missile Grenades only for a force field made of water to stop the projectiles and more electric bolts to make sure they wouldn't interfere again. The XIG members then got out of their vehicle and began to shoot their pistol's into the Mizunoeno Dragon's left eye, forcing him to release Gaia. Miyumi knew Gaia's intentions and when his Life Gauge went off she convinced the Mizunoeno Dragon to reconsider. The Mizunoeno Dragon did reconsider as he now knew Gaia's intentions were good and reverted into a small flying ball that went back underground. The Dragon's Capital

Mizunoeno Dragon returned as the last monster to appear to defend Earth against the Dobishi swarm after Zog defeated Gaia and Ultraman Agul. After defeating a Kaiser Dobishi, the Mizunoeno Dragon would later appear when Zog showed her true form. A single shockwave ball was enough to make the mighty dragon dizzy and unable to fight. After Ultraman Gaia Supreme and Agul destroyed Zog, the Mizunoeno Dragon lived the rest of his days in peace. The Cry of the Earth Earth is Ultraman's Star 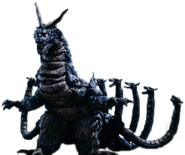