To the Ultra Future

Hitomi Hasebe
Mizuki Koishikawa (コイシカワ・ミズキ Koishikawa Mizuki) is a member of DASH and an excellent pilot. She is Kaito Touma's partner in the field, who she often teases. But at the end of the series, she shows her love for Kaito. Mizuki can be impetuous just like her partner, both putting themselves in danger to carry out there misson. She joined DASH in hopes of meeting people from other worlds, and dreams of the day when all the people of the universe will come to understand each other.

While fighting a monster Grangon, Mizuki spotted Kaito near the monster and tells them to hold their fire until he left. After the monster was seemly destroyed, Mizuki met Kaito and told him he shouldn't have been near a monster, but Kaito told her he was protecting a boy and all that he wants to do is to protect people and be better than DASH, and left. 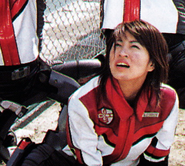 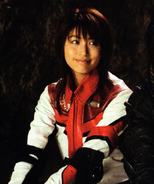 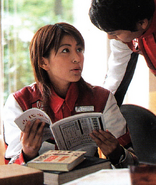 Kaito (as Ultraman Max) with Mizuki 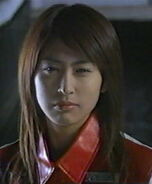 Mizuki "jealous" with Pigmon (as Elly)

Mizuki places a pen on her lip

Mizuki in 2076
Community content is available under CC-BY-SA unless otherwise noted.
Advertisement