ULTRAMAN chapter 1
A Power That Shouldn't Be On This Earth

Ken Uo
Brian Palerma (English dub)
Masashi Ebara (Motion Comic)
A veteran of the original SSSP, Mitsuhiro Ide ( Ide Mitsuhiro) is a life long friend of Shin and an uncle figure to his son Shinjiro. The tech wizard of the original SSSP team Ide's technological genius is the force behind the creation of the Ultraman Suits used to battle evil aliens.

Shin's teammate from the original SSSP some forty years ago, after Ultraman's last battle with Zetton, Ide and the rest of his team were made of aware of the now amnesiac Shin's previous merger with Ultraman. The team resolved to protect their friend who had fought so hard to protect the Earth from becoming a lab rat of uncouth and xenophobic scientists. It was their decision to keep the SSSP active when the decisions was made to close it down. The team went their separate ways with Shin eventually becoming the minister of defense and Ide becoming the head of SSSP. Ironically it was based in the Giant of Light Memorial, a museum operating out of the old SSSP's base and dedicated to the SSSP and Ultraman's battles.

Thirty years after the public dissolution of the SSSP, Shin visited the museum with his young son Shinjiro and met up with Ide. While the two talked Shinjiro accidentally fell of the railing landed a story down. While Ide suggested calling an ambulance Shin, clutching his son, declined and said he would alright. Ide watched with concerned eyes and the two left and young Shinjiro happily waved goodbye. A short time after Ide called Shin to his office, learning of his old friends superhuman strength, he revealed to him the truth of the SSSP's existence. To convince his friend he showed him an unaltered video recording of an Ultra-like creature destroying an airplane. The creature's familiar appearance awoke Shin's forgotten memories and Shin learned that he was the only one of the team who didn't know he was Ultraman. The two resolved to fight these new threats with Ide developing a prototype suit based on the legendary giant for Shin to fight in. The dark creature known as Bemular fell and the two continued to protect the Earth until the learned of the Universal Alliance, a sort of U.N. for all of space. Getting Earth into this intergalactic organization solved several of their problems, no species could invade them and the aliens got rid of all the remaining monsters on Earth but it also had unintended consequences. Ide was replaced by Zettonian, the supposed last of his kind called Edo as the leader of the SSSP and several aliens freely migrated to Earth. While most were civil creatures some rampaged and the SSSP had to destroy them and keep their presence hidden from the public.

Years later, Shin's son was now a teenager and attacked by the resurrected Bemular who intent on destroying all holders of the Ultraman Factor. While Shin went of to fight Ide followed in cargo helicopter which was used to catch Shinjiro. There Ide explained his father's past and the source of his abilities to him and when the monitors showed that his father was losing, he equipped the boy with the Ultraman suit. As Shinjiro took over for his father, Ide commented on how much greater his power was than that of his father.

As the battle raged on Ide contacted Shinjiro over the suits communication feed and explained to him how to use the Spacium Beam function of the suit and rushed to him after the battle was over and he fainted from exhaustion. After the battle Ide and Edo were next Shinjiro's bed and were the first things he saw when he woke up. After taking the boy to see his father Ide took him to see the Zettonian who explains to him the situation of the world, the SSSP, the alliance and his father's job as well as asking him to take over. While Shinjiro doesn't immediately agree Ide still acted as his mentor during his test runs of the armor, ordering him to the sight of an accident to save a truck driver.

Later on during Shinjiro's fight with Alien Adacic, he watched with Edo as the boy made his declaration and when Edo gave him the order he called Shinjiro and directed him on how to release the limiter in the suit. After the battle Ide examined the bodies of the alien's victims and showed his findings to Edo. Each victim had been tagged with a barcode on the back of their neck and most if not all of them were young men and women. As he gave his findings ide did his best to keep his anger in check. Ide agreed with Edo's statement that there a criminal organization behind the barcodes.

Ide met up with his ex-colleague Shin Hayata at the old SSSP base, now the Giant of Light Memorial, when Shin decided to bring his son Shinjiro there. While the two were having a conversation, Shinjiro fell after trying to reach a Jet VTOL diorama, which alerted everyone. Ide wanted to get Shinjiro to the hospital, but he turned out to be just fine. Later that night, a frustrated Shin Hayata returned to meet Ide, saying that he does not remember anything about Ultraman. Ide reveals to him that the SSSP never really disbanded, but was now operating as an underground organization. Ide also show shim a video of a supposed terrorist attack on a plane, and a mysterious figure who seemed to be behind it. Upon seeing this, Shin Hayata's memories of Ultraman came back to him, and Ide revealed that a new alien threat was approaching the Earth. A Power That Shouldn't Be On This Earth

Shin reveals to his son that he knew about his superhuman powers all along before flinging him up to a SSSP helicopter, and begun to battle Bemular. Aboard the helicopter, Shinjiro meets Ide once again, who had been ordered to keep Shinjiro safe and transport him away. Instead, seeing Shinjiro's frustration at being unable to do anything, Ide decides to provide him the Ultraman Suit. Shinjiro accepts the offer and falls back into the stadium, putting the suit on as he took his father's place in fighting Bemular while Ide guided him in using and monitoring the suit's various functions. After a long battle, Ide taught him to use the Specium Ray on Bemular, who surprisingly survived the attack. An Inescapable Fate

Ide came into the room where Shinjiro awakened and both he and Edo revealed that the Earth had made peace with aliens by signing a deal with the Star Cluster Alliance, though there were still alien threats on the Earth other than Bemular. Ide requests to Shinjiro to become Ultraman, and sends him on various missions to help him adjust to the suit and build his confidence. Later on, Ide sends Shinjiro on his first real mission, to assist fellow SSSP member Dan Moroboshi take down a target. Being Ultraman Isn't Bad Seeing Shinjiro getting cornered by Adacic during their confrontation in the city, Ide lets Shinjiro know about the limiter in his suit, before releasing it, granting Shinjiro the power boost he needed to finish off Adacic. Release the Limiter!

Later, Ide and the other SSSP heads got Jack to set up Black King to fight Shinjiro in public, wanting to forcefully develop his powers. The Curse of Ultraman The plan was a success and Shinjiro learned that he could fly. Later on, he had to thank and apologize to Jack for his services, since Black King was now dead. He later learned from Edo that Alien Igaru's communicator was stolen and used by someone else, shocking him. Hidden Thoughts

Ide later gave a new mission over the phone to Shinjiro to deal with a monster designated a Terrible-Monster. Unknown to them, SHinjiro's phone had been hacked into by Seiji Hokuto. Ide was surprised to see Seiji in the new Ultraman suit, who had just dealt with the monster. Nice To Meet You, Brother Ide was in charge of interviewing Seiji after he was brought in by Shinjiro and Moroboshi. Star Cluster Alliance

Shinjiro and Moroboshi are called in by Ide to discuss about the airplane tragedy. He shows them the list of passengers, which reveals that Seiji and his family were on that plane, though all 247 passengers and crew were reported to have died. Ide was present during Yapool's questioning and learned that Bemular was not the one who perpetrated the airplane incident 12 years ago, but was instead trying to prevent it. He also noticed Edo was missing. Ace Killer

Ide sends a Specium Sword to Moroboshi when he requests for a weapon to fight against thugs under Ace Killer's gang, and defeats them with it. When Bemular arrives to pick up Seiji, Ide questions if Shinjiro trusts him , which he replies saying he does. Shin also reassures him, saying "He also wants a Warrior of Light." A Real Ultraman

Like his original counterpart, Ide is an inventor and technological genius and no doubt had a hand in several pieces of technology the current SSSP uses. His primary and most important contribution is the Ultraman suits the father and son protagonists use to fight. 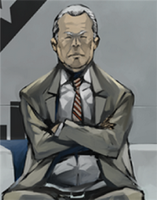