Ultraman Wiki
Register
Don't have an account?
Sign In
Advertisement
in: Heroes, Other Heroes, Protagonists,
and 5 more

Unknown
Mirrorman Reflex (ミラーマン REFLEX Mirāman REFLEX) is a reinvention of the 1971 Giant Hero Mirrorman. He first appeared in the movie Mirrorman REFLEX. A reimagining of the first half of the original series, it is darker than most Tokusatsu and does away with the entire alien invaders plot point, instead it draws from ancient Japanese mythology and folklore. Because of this, Mirroman Reflex's enemies have more in common with the Horrors of Garo than the aliens and monsters of most Giant Hero series.

The story around the main character was that he was killed sometime ago in the war, around the same time his niece Momoso also expired under mysterious circumstances. As a spirit he wandered to his brothers house, where somehow the two were revived to fight for the Manifest world and its denizens. During the series the plot revolved around Yuichiro's plans. Yuichiro is a rich business man with occult knowledge and followers similarly skilled in the dark arts. Using a university researcher name Akami Hiro, who was studying an ancient mirror. Yuichiro created an imaginary boyfriend, via a language spirit, to manipulate her into releasing a jashin called Shiyu. Akami was saved from being devoured by a mirror demon by Akira and Momoso and watched as Akira transformed and dealt with the demon. Yuichiro was intrigued, he wondered why a mirror demon would fight on of its own until his servant Reiki (possessed by a jashin of that name) explained to him the nature of Mirrorman. From that point, Yuichiro turned his plans from commanding the forces of the Hidden World to conquer the world to acquiring the power of Mirrorman.Yuichiro made his next move by trying to force Akira to transform in front of him (over video cameras). To this end he set up a battle using Akira's old army buddy transforming him into a mirror demon called Kyuki. He then killed off his disciple as she was no longer of any interest to him. He sent lesser jashin to abduct Momoso forcing Akira to transform to follow her through the mirror. However this resulted in a incomplete Mirrorman with no helmet and large red glowing eyes with a slouched over posture. Matters became worse when he reached the other side, where he found Momo held by Kyuki, who then tossed her aside. With both men transformed they could see each others human forms, Akira recognized him as his squad mate from the war who betrayed and killed him. When confronted he simply stated it was to survive, enraging Akira, who was stopped by Momoso using the mirror Yuichiro's disciple used for the ritual to transform the other Kyuki. Akira's transformation was forcibly cancelled and he re-transformed into a complete Mirrorman and fought his old adversary. At first things were not going Akira's way as he lost his sword on the pipes above but he used his chakram to drop the blade in Kyuki's back and finishing him off with a strike down his face and chest. Akira transformed back and went to Momoso only to hear Yuichiro on the radio commenting on the powers of Mirrorman. The two tried to leave only to stop by Reiki who spat a fireball at them before disappearing. The two avoided it by ducking behind a column and then left unaware they passed Akami who was looking for them.

Akira transforms into Mirrorman by standing in front of a reflective surface and having his niece, Momoso, chant the spell that transforms him into Mirrorman. This is usually done with her holding a ceremonial mirror. Akira does not require Momoso for the actual transformation as the power of Mirrorman is his, but without her help he would transform into an incomplete berserker form. 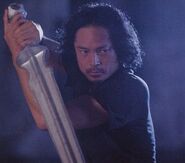 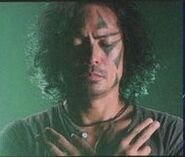 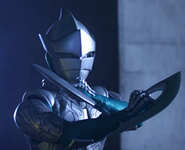 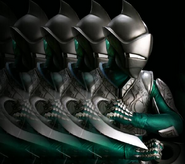 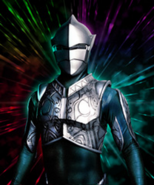