This may not be the article you are looking for. For other uses of the word "Mirror", see Mirrorman (disambiguation).

None
Mirror Master is a villain in Ultraman: Another Genesis who is Mirror Knight's evil counterpart.

Existing as a spiritual intelligence that relied on instinct, he was given form and access to the three-dimensional plane by a figure in all black who also gave him his body and a shard of the destroyed the Kingdom of Light. With a body he set of into this new form of existance and encountered the twin forces, Luna and Corona. He was offered the same choice as many who came before him and chose the Light of Instinct, rejecting Reason outright.

Eventually Tiga came to serve him and under his orders untold numbers of innocents were slaughtered. However, Tiga eventually met the twin giants as well, but chose instead Reason and turned against his master. Their confrontation ended with Mirror Master trapping Tiga in a prison of darkness.

Mirror Master's original existence was as a spiritual intelligence, a spiritual life form that relied on instinct, he wanders across the universe until a figure in black gave him a shard of the destroyed Kingdom of Light, allowing him to generate his own body.

After bestowed the Light of Instinct from Corona, Mirror Master's body changed in ways that gave him a drastic new design resembling collected broken mirror shards. 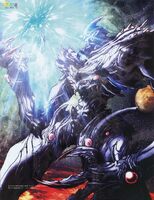 Mirror Master's original form
Add a photo to this gallery
Retrieved from "https://ultra.fandom.com/wiki/Mirror_Master_(Another_Genesis)?oldid=511752"
Community content is available under CC-BY-SA unless otherwise noted.