None
Mini Tortoise (ミニトータス Mini Tōtasu) is a giant baby turtle who hatched from Queen Tortoise's nest after she was brutally killed by the military. Her fiercely protective father, King Tortoise, initially shielded her from Taro as he viciously avenged her mother, but midway through the fight opted to use his abilities to cause her to grow in size to become a juvenile of the species. However, as the two monsters gradually came to realise that the loss of Queen Tortoise wasn't Taro nor ZAT's fault, the duo opted to leave Earth with Taro and Seven's help, who both then reunited the family by reviving the Queen. 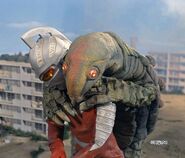 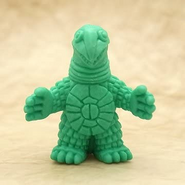