New Ultraman Retsuden episode 49 "Path to Conquest! Departure of the Darkness Five for the Front!!"
Mikonos (ミコノス Mikonosu) was a monster that appeared in episode 8 of The☆Ultraman.

After Alien Baltan crashed his saucer into a mountain, Choichi went to investigate thinking it was a strange meteor. However, he instead encountered Baltan's minion Mikonos as he dug his way out of the mountain. Choichi turned into Ultraman Joneus and quickly engaged in battle with the monster after surviving a rock slide. Mikonos used brute force against Joneus, but was easily out maneuvered by the hero and his wrestling style attacks. Once the Scientific Defense Guard arrived on the scene they witnessed Joneus executing a flying kick to Mikonos's head before he was finished off by the Planium Beam. While Mikonos lost to the hero it gave Baltan the opportunity to record Joneus turning back into Choichi from afar. 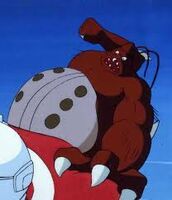 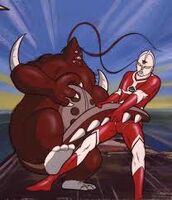