Ultraman Saga
Mienin ( ミーニン Minin), whom originally known as by their true name Gamodama (ガモダマ, Gamodama), are a peaceful alien race which were destined to become the destructive monster Gamoran (ガモラン, Gamoran).

One night, three meteorites fell onto the Earth. The first meteorite is a trunk box with the rest of them are unknown aliens' meteorite form. The trunk box was early discovered by Team EYES with the first alien meteorite fell into the hands of Nagano, a student who brings it to his friends at his school with the other one located at a factory where Shinobu finds it. However, once Doigaki successfully opened the trunk box, it activated the aliens. The first one at the factory was awakened with the Bio-Controller (バイオコントローラー Baio Kontorōrā) crown connects to it's forehead, turning it into Gamoran. While in Nagano's care it also awakes but the crown destroyed by his friend as they called it Mienin and brought it to Gamoran (since they mistake the giant for his father). Mienin tried to calm Gamoran but failed before Cosmos arrived. The kids tried to stop Cosmos from attacking Gamoran since one of the kids realizes that the first monster only became wild due to the crown. Cosmos fired several beams, destroying the crown and revert it to normal. Both of these aliens were sent to Kaburaya Island for protection. Present from the Sky

Mitoru was sent by her race to make a final test for humanity as she kidnapped a Mienin from Kaburaya Island and Musashi to prevent him from interfering her plan. When she placed the Bio-Controller crown on Mienin, it became Gamoran and terrorized the city. When Team EYES uses the other Mienin to calm his crazed friend, the space girl realizes that humanity was proven rational and decided to release Musashi so that he can transform into Cosmos and purify the monster. Final Test

In The Final Battle, the second Mienin accompanied Ikeyama in restoring Musashi after his defeat.

Mienin later becomes the resident of Planet Juran as it can be seen talking with Chaos Header 0. It is also present on a cliff with Bolgils and Lidorias flying in the background. Ultraman Saga 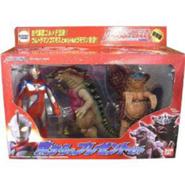 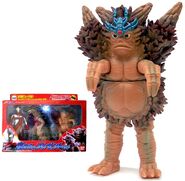 The figure up close.