Miegon is portrayed as a nine-tailed fox of legend and even as a mother of a young girl. When the girl came to see him, Kotarto explained to him that Miegon was in fact, the monster that killed the girl's mother. As the smoke showed and the fire attacked innocent bystanders. It then emerged from a mountain, where it standed opposition by ZAT members on their aerial vehicles. It made it's way towards a cable car with the girl inside while resisting enemy attack by disappearing and reappearing at random locations. The attack team then decided to use staining gas to give away the monster's location. After revealing itself, it attacked both the plane that stained it and the cable car before Ultraman Taro showed up to fight the monster.

Taro showed up the monster by using his Atomic Punch to send him flying before saving the girl from the inflamed cable car. Miegon showed up to engage in more fisticuffs before suffering from a broken leg from a strong leg attack. The monster then resorted to using his flames to attack but Taro summoned his Taro Barrier to protect himself from them then jumped up and defeated the monster by kicking him in the head hard and kept breathing flames the entire time before falling down and exploding into flames. 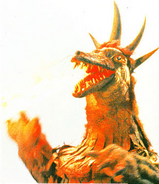 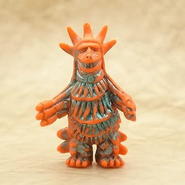 A Miegon eraser
Community content is available under CC-BY-SA unless otherwise noted.
Advertisement