Tiga, Dyna, and Ultraman Gaia Novel: The Adventure in Hyperspace
Mezard (メザード Mezādo), also referred to as Wave Life-forms (波動生命体 Hadō Seimei-tai), are a species of Kaiju that appeared in Ultraman Gaia. The Queen Mezard is the one responsible for the implanting a computer virus on Hiroya Fujimiya's super computer Crisis.

The first Mezard, a monster from the Hyperspace, came to Earth in the form of Wave Life-forms and without detection at Waterfront City. Suddenly, sand oddly started appearing and a replica of the Statue of Liberty along with many buildings collapsed and were destroyed, practically turning Waterfront City into a desert. XIG quickly responded by sending Team Lightning to investigate, with the rest of GUARD's land forces going to rescue survivors. Once XIG had arrived to see what had happened, the Wave Life-form revealed its true nature as Primal Mezard, leading XIG to promptly fire upon it. Primal Mezard was able to confuse the team, disappearing and reappearing, and seemingly phasing through attacks. Gamu Takayama ordered the team to retreat back, as their homing attacks couldn't hurt it. He then performed an analysis on the previous battle and asked his Alchemy Stars friends at university to invnet a device that can interfere with the Wave Life-Forms' existence, making it tangible. Later on, Primal Mezard attacked again, but Gamu used the EX Fighter Plane, equipped with the device and finally attacked the being successfully. In a last resort, Primal Mezard evolved into its true form, Mezard right as night fell. Mezard initially was attacked by a barrage of missiles from Team Lightning's Satoshi Ogawara, however the beast countered and shot down Satoshi's fighter with its energy blasts. Gamu transformed into Ultraman Gaia, and quickly ran at the beast, but Mezard quickly overwhelmed the red giant with a series of energy blasts and wrapping its tentacles around him. Team Lightning distracted Mezard by firing at him, buying Gaia time to free himself and fire the Photon Edge, setting Mezard on fire. Gaia put down the monster now in agony with the Gaia Blizzard, vaporizing Mezard entirely.

KCB received a call from a young boy that his village became zombies and went to investigate. XIG was also interested in this village after observing a small riot with a sign saying Moon Valley. Not far behind either faction was Hiroya. When KCB got a flat tire and two of them went to interview the locals the zombified people quickly ambushed the camera man. Now KCB's simply fled camera man while the zombies tried to use the same cell phone trick to turn his former comrades into zombies as well, but escaped back to the news van. The zombies, now referred to as Puppet People, quickly caught up to the duo and the chase continued. Before long only the reporter was left, but Hiroya showed up just in time, but came for his own reasons. With the three KCB crewmen scattered it was up XIG, unknowing what exactly was happening, to restore order. The young boy that called and one of the crewman managed to signal an SOS and Gamu saw it in his fighter. Before anything could be done Psycho Mezard revealed his Wave form and attacked the fighter. Like before a special wave brought the Wave Life-forms together and a Side Winder was enough to set the Wave Life-form in flames. After a few of Psycho Mezard's stomach blasts Gamu turned into Ultraman Gaia. Gaia was too much for the alien Kaiju in close quarters, but Psycho Mezard quickly gained the upper hand once he was using ram attacks in mid air. Mezard quickly used a sneak attack with his extending electric arms and began to shock Gaia until the KCB reporter shot him in the neck with a normal pistol. Just as he was about to retaliate Ultraman Agul appeared and stopped the blasts during his transformation. Agul was too much for the creature and after being tosses around he finished it with a Photon Crusher. The Puppet People quickly returned to normal. The Night of the Marionettes

Atsuko kept having strange visions about a carousel with her childhood doll, Lilia, as a real person. Once a wormhole with a new Psycho Mezard reared his head Team Lightning was sent in action. Before Team Lightning could do anything Atsuko began to hallucinate about her visions again and the wormhole released some sort of golden spores that slowed down Team Lightning's flight and made them incapable of firing, forcing them to retreat. The wormhole closed shortly after. As Kaijo tried to find out what was wrong with Atsuko XIG was trying to see where the wormhole would appear next. Later that night Team Falcon was launched and XIG managed to track down Psycho Mezard's energy to a theme park. A new wormhole turned out to reveal a Wave Life-forms that was quickly shot down and formed into Psycho Mezard. As XIG and Psycho Mezard went at it the face on Psycho Mezard's stomach kept keeping Atsuko and Kaijo at bay, but their spirits were too much for the illusion to take hold as they soon broke free of the illusion prison as well as a poor woman controlled by the turtle-like monster. Gamu turned into Ultraman Gaia and try as he might Psycho Mezard was of no match for the hero's power and was blown to pieces by the Quantum Stream. Lilia's Maze

Queen Mezard (クインメザード Kuin Mezādo) is the leader and source of all past Mezards and Wave Life-forms. She first appeared in Ultraman Gaia episode 37.

Queen Mezard decided to conquer Earth herself after the first three miserably failed. She brainwashed men on Earth and had them create a wormhole for her to unleash her powers on Earth. After taking over KCB News building Queen Mezard's Wave Life-forms were found by XIG and shot down. At the same time Queen Mezard created a hallucination on Hiroya in the form of his dead friend/co-worker, but Hiroya came to his senses and shot the imposter. As Queen Mezard tried to take over KCB's computers Gamu turned into Ultraman Gaia and found Queen Mezard's true form in her Super dimension. After Queen Mezard used lightning bolts, she used her hallucinate abilities to create a second imitation Agul: Phantom-Ultraman Agul (幻影ウルトラマンアグル Gen'ei Urutoraman Aguru), claiming it to be the cries of the innocent monsters destroyed by the underground driller missiles. As the two were fighting XIG released a special missile that not only destroyed Phantom-Ultraman Agul, but weakened Queen Mezard to where Gaia used a red version of the Liquidator to blow her up, ending the Mezard terror for good. The Fourth Symphony of a Nightmare

A Psycho Mezard was among the monster kidnapped by Charija for his business and launched as vanguards for the Red Sphere. It engaged against Ultraman Tiga in aerial combat and destroyed once colliding with Chaos Jirak, both being the receiving end of Tiga's Ranbalt Light Bullet and Dyna's Garnate Bomber. Tiga, Dyna, and Ultraman Gaia Novel: The Adventure in Hyperspace 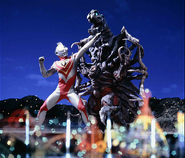