Metamorphosis (変身 Henshin) is the twenty-second episode of Ultra Q.

Residents are horrified when reports of skeletal remains and giant footprints lead them to believe that an abominable snowman may be lurking in the nearby mountains. When the press is alerted, Yuriko is visted by her friend, Ayako, who relates a desparate story. While helping her fiance, an entomologist named Koji, collect insect specimens, they discovered a large species of Morpho Butterflys that were thought to be native only to the Amazon. When the strange insects expelled their poisonous pollen on Koji, he became ill and fled from Ayako as though he were insane. When she finally caught up with him. Ayako became terrified to find that he was mutating into The Giant Aided by Dr Ichinotani, the investigative trio pursues the trail of the lost Koji. When sighted, Koji has grown to a monstrous height and appears to have lost his human identity. The frightened masses view him as a monster and the military is called upon to stop him. Ayako desparately reaches out to Koji, trying to revive any memories that he may still have of her. Dr. Ichinotani employs the X beam, a concentrated atomic heat ray designed to counter the effect of the Morpho poison, and before Koji can harm Ayako, he is driven back into the forest. Following his trail, Jun and the others find that he has been restored to normal size and is happy to be reunited with Ayako. 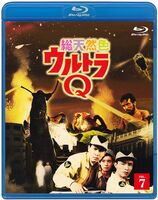 Total Natural Color Blu-Ray
Add a photo to this gallery
Retrieved from "https://ultra.fandom.com/wiki/Metamorphosis?oldid=511704"
Community content is available under CC-BY-SA unless otherwise noted.