None
Metamorga (メタモルガ Metamoruga) is a monster that appeared in the TV series, Ultraman Tiga. He appeared in episode 47.

Metamorga was a monkey who was mutated into a monster by the Evolu experiment of Ryosuke Sanada. After his master died at the hands of Ultraman Tiga, Metamorga hid in the sewers, feeding on electricity to stay alive. Once he was found by GUTS, Metamorga rampaged wildly, destroying a power plant both to consume its electricity and out of bitterness towards humanity for turning him into a monster. Shortly after GUTS fired a flamethrower at him, Metamorga retreated.

Metamorga later appeared at the site of his and Evolu's origin, the Stellar Development Center. There, Metamorga began to consume the chemicals that the Center was producing. When GUTS arrived, they tried to freeze Metamorga with Liquid Nitrogen, but Metamorga's Evolu cells allowed him to increase his temperature into quickly melting the ice that surrounded. Freed from the ice, Metamorga proceeded to attack the Center. Learning with Horri that friends of Horii were trapped inside the center, Daigo transformed into Ultraman Tiga and battled Metamorga himself. Metamorga's energy absorption abilities and wild inheretance was enough for the mutant monkey to overwhelm Tiga in battle. Suddenly, just as Metamorga was about to endanger Sayaka, one of Horii's friends, an spirit-like entity of Evolu suddenly appeared and held Metamorga in place from harming Tiga or Sayaka. With the opporitunity, Tiga transformed into Sky Type and froze Metamorga with his Tiga Freezer and carried the mutant into space, allowing Metamorga to explode safely without harming anyone. 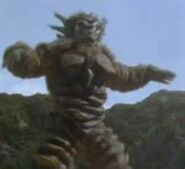 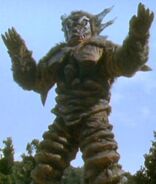 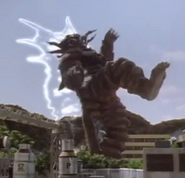 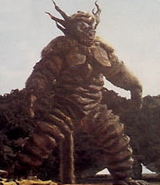 Metamorga in a stage show.