―Menscheit describing himself to HEART and the defense force members.

Kazunori Yokoo
Mensch Heit (メンシュハイト Menshu Haito) is the main antagonist of Ultraman Neos. A being that was born from the will of Dark Matter, Mensch Heit is responsible for Alien Zamu's banishment to Earth.

Mensch Heit is German for humanity.

Self-proclaimed as the will of the universe, Mensch Heit foresee the threat that would be carried by the natives of Planet Zamu. Using the combined monster Grall, he sent its natives on an exile to Earth.

Later, the space demon learned that the survivors of planet Zamu had escaped to Earth and is well aware that even a single one of their kind could revive the entire population.

Mensch Heit first made his existence to the Earthlings when Grall failed to kill the last of Alien Zamu and was heading towards HEART headquarters to kill him. The alien warlord issued a warning demanding they extradite him, while a leader in the defense force wished to comply the members of HEART did not and rescued the boy. After his assassin was defeated, Mensch Heit appeared before the HEART members and attempted to bully them into obedience but they still refused.

Out of patience, he revealed his true form and was about to attack them when Ultraseven 21 appeared to do battle with him. However, the space demon over powered him and the help of HEART was for naught. It was then that Ultraman Neos appeared to help his friend but the appearance of another ultra did little to change the flow of battle. Mensch Heit assaulted the pair with hurricane winds from his wings and pyrokinesis from his third eye leaving the two for dead. All seemed lost until the last child of Planet Zamu gave his life to revive the Ultras. Recharged, the pair brought demon crashing down, leaving him open to be manhandled by the two. Loosing badly, Mensch Heit unleashed his strongest attack, an energy sphere only to have shot back at him by the pair's signature beams. With the battle over, the people of Planet Zamu were avenged. 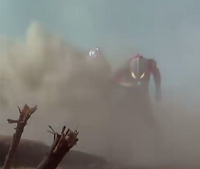 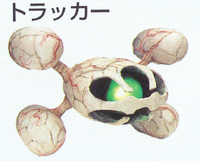 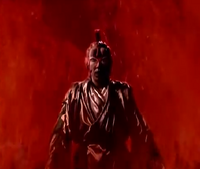 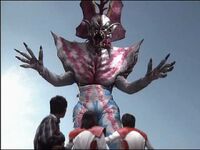 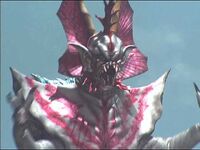 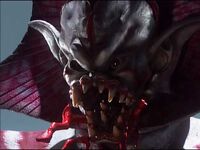 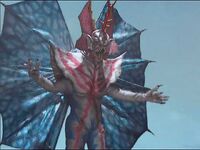 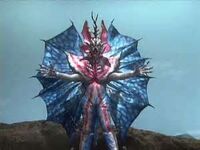 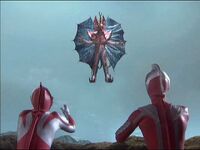 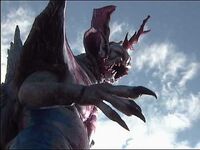 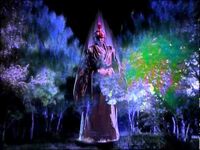 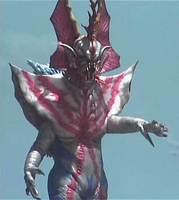 Mensch Heit having defeated both Neos and Seven 21.