None
Menjura (メンジュラ, Menjura) are a race of aliens that appeared in the TV series, Ultraman Tiga. They appeared in episode 48.

Alien Menjura were a race of aliens who had planned for an invasion of earth. Their first attack was on TPC's moon base, Garowa. There, the Menjura took the forms of Captain Hayate and Corporal Kishinaga, cocooning them and using their identities to frame them for destroying Garowa. Once the Menjura arrived on Earth in the forms of the Corporal, they began taking the forms of several other people, including the Inspector General, the Staff Officer, and even Captain Iruma of GUTS, all while GUTS themselves began to grow incresingly suspicious of the impostor's choice of actions. Once Obake (a survivor of Menjura's attack on the moon base Garowa) arrived at GUTS's HQ, he exposed the Menjuras' true identity, forcing the surviving Menjura (still in their disguises) to escape with a hijacked jet from GUTS.

Daigo transformed into Ultraman Tiga and chased down the jet with the Menjura aliens inside of it. After blasting the jet and forcing it to crash in an Oil Refinery, the Menjura combined into its monstrous giant form, blasting Tiga down as well. The twin Menjuras quickly overpowered Tiga with its array of weapons and double teaming, but once Obake and GUTS arrived to assist the Ultra, the odds were evened for both side. Ultimately, both Tiga, TPC, and GUTS managed to destroy the Menjura with a combination of Tiga's Zepellion Ray, and the gunfire of GUTS and TPC. Fugitive from The Moon 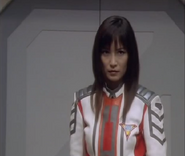 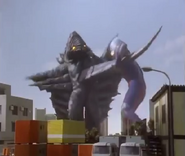 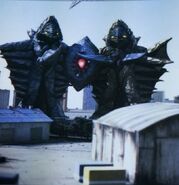