"I am Captain of the Andromeda Nebula Branch of the Inter Galactic Defense Force. The name is Melos!"

N/a
Melos (メロス Merosu) is an Ultra Warrior from the popular The・Ultraman manga series. He is Fightas' biological brother and the foster father of Aura.

Melos appeared on Earth to fight the Jackal Army after the Ultra Brothers were defeated and executed. He managed to repel an army of monsters before removing his mask and armor to reveal himself to the army's commander. He later fought against the leading Jackal after traveling to Jackal's home planet, and although his opponent's shape shifting abilities put him at a disadvantage Melos managed to cut off a horn off of Jackal. Jackal begged for mercy and when Melos turned to leave, Jackal deactivated Melos' armor and caused a massive explosion. But Melos' effort allowed Zoffy to gain the necessary power and time to revive the Ultra Brothers and destroy Jackal. Melos survived the battle and was helped up by the Ultra Brothers. The・Ultraman: Jackal vs. Ultraman 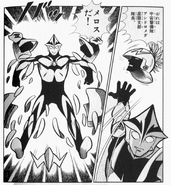 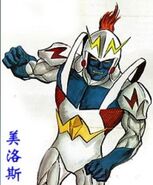 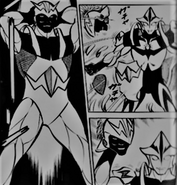 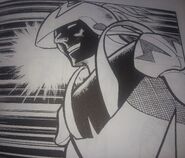