Mio Takaki
Megan Hollingshead (voice, English dub)
Megumi Iruma ( Iruma Megumi) is the captain of GUTS, as leader she had a rather motherly relationship with her team.

Before joining GUTS, she was a manager of the special group, working to communicate with extraterrestrial life. Unfortunately, her husband, who also acted as her co-worker lost his life in a lab accident. With her late husband, she has one son named Tomoki who has been living with grandmother. Her mother-in-law holds great disdain for her against her for not stopping her work in the wake of her son's death. Her son's talent regarding computer technology is genius level, even more so than Yazumi, even he is so young. Her ability as GUTS Captain is excellent. All members trust her decisions, especially Munakata who trusts and respects her so much as she saved his life before they joined GUTS.

It is stated by Camearra that Iruma is the descendant of Yuzare and her reincarnation, as shown when the spirit of her ancestor emerged from her unconscious body to seal the Dark Giants on R'lyeh island. Ultraman Tiga: The Final Odyssey

Five years after the threat of Dark Giants, she and GUTS went on to live separate lives. Asuka went to visit her to know more about Tiga. Asuka admires that GUTS was a good team and asked her if she still sees them, but she doesn't. Asuka wanted to know if he could meet Tiga, but Iruma said he can't because he left after the battle with Gatanothor. She told Asuka that Tiga has light that can lighten everyone including Asuka and Tiga can always win against darkness with his Existing Light. After Asuka as Dyna was killed by Queen Monera. However, a young boy with an Ultraman Tiga figure is able to get everyone to believe in the light, and everyone lends their 'light' to bring back Ultraman Tiga with Iruma happy to see him once again. After the battle Iruma, she meets a little girl who is revealed to be the daughter of Rena and Daigo. She even reunites with Rena, Tetsuo, Munakata, and Horii. Munakata gave her flowers. Ultraman Tiga & Ultraman Dyna: Warriors of the Star of Light

She also assisted Super GUTS when Asuka and Ryo are captured by the TPC in order for the creation of a new weapon. Final Chapter I: A New Shadow 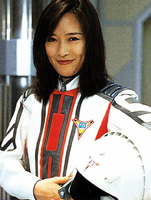