Sent to Earth with a squad of Alien Babilar soldier, the mechanical monster weapon scattered in the atmosphere, causing its owners to have to scramble to collect it. However, they missed one which ended up in the African Zone under the purvey of Dr. Nishiki.

The doctor headed to the Far East Zone to get assistance from the Science Defense Guard in analyzing the part he found. Despite their attempt to retrieve it by attack his plane they SDG drove them off.

Later, after the part was repaired, they followed it ultrasonic call and retrieved it from the SDG headquarters, and placed the Sentiment Circuit into their weapon and proceeded to pilot it, with their sights set on attack Tokyo. They were met with resistance from the Defense force, the Scientific Defense Guard and finally Ultraman Joneus. The machine and its owners were destroyed when the Ultra fired on its belly, its weak spot, on the advice of Dr. Nishiki. 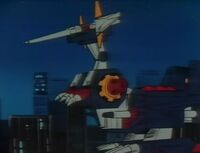 Add a photo to this gallery
Retrieved from "https://ultra.fandom.com/wiki/Megasaura?oldid=511676"
Community content is available under CC-BY-SA unless otherwise noted.