One sunny day in the city of Aoba, exactly twenty years after the Visitors came to Earth and Ultraman the Next defeated the original space beast, Beast the One, in Shinjuku, the latest space beast by the name of Mega Flash appeared by the Unknown Hand and began to use it's tractor beam tentacles to capture humans for its own intentions. It did not take long for Ren to turn into Ultraman Nexus and save four of the ten humans it was about to absorb. Mega Flash and Nexus stood down as the civilians below them were in awe. Nexus tried to use the meta field, but Mega Flash's field diffused the energy used to create it. It then started to use its lightning to destroy the city and Nexus. Night Raiders soon arrived to the scene to assist Nexus. After Mega Flash was shot out of the sky, Nexus began to assault the space beast's head, but was soon flown off by its fast sliding levitation. Before the battle could continue Mega Flash left with the Unknown Hand. Mega Flash returned later that day by the Unknown Hand as Ren was trying to recover. As Mega Flash was using it's lightning to fire on the people below, Nexus returned to battle once again. During the titanic clash Nexus and Night Raiders overpowered the space beast, but after the hero used the Nexus Kick he began to feel weak and reverted into human form. This happened because Ren was a defected child of the Prometheus Project and didn't have long to live. After Mega Flash burrowed underground, the Unknown Hand teleported it away from harm. Mega Flash returned at dusk in New Town to continue to terrorize humans. Nexus arrived on the scene and shortly into battle the Unknown Hand revived Galberos. With Nexus fighting two space beasts and only Komon in Chrome Chester Delta to help him, the situation became very dangerous as the hero was being beaten by his adversaries. After using the Hyper Strike Vanisher, Mega Flash was killed and was reduced to particles with Galberos after being slayed with the Schtrom Sword. 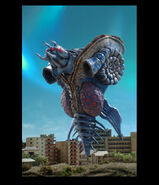