"Mebius, you're too naive. Only the strongest one will dominate the universe, don't you think?"
"No, that's not the true power you seek."

Unknown
Mechazam (メカザム Mekazamu) was a robot (cyborg due to Empera's essence) that appeared in Ultraman Mebius Gaiden: Ghost Rebirth. Originally a wandering swordsman that try to seek for an ultimate power, it was later revealed that he is actually a vessel of Alien Empera, named Ghost Rebirth (ゴーストリバース Gōsuto Ribāsu).

He was built after the famous swordsman Zamsher, sharing same traits such as speaking in Keigo and portrayed tsundere-like attitude, even showing a power hungry personality.

Built by the Alien Empera's forces, Mechazam's true purpose is to become a spare body for the ruler should he died. Since he is created with the technological knowledge of the Empera Army, the warrior possessed the same regeneration technology that the Inpelaizers used, enabling him to constantly self regenerate/repairing himself. As time passed, Mechazam became a wandering swordsman without knowing his past life and his original purpose, bearing the goal to become the strongest warrior in the universe.

A long time ago, a disturbance was detected at the Ultra Zone in the Monster Graveyard, where deceased monsters came to life. The Dark Four Heavenly Kings were revived as well and lead an army of monsters against the Ultra Brothers. Mechazam joined forces with the Ultra Warriors in hopes of finding a challenging opponent but as the battle ended, he disappeared after his wish did not go on as expected.

The Dark Four Heavenly Kings reunite and make an attempt to revive the Emperor by uniting Mechazam and the Giga Battlenizer. Before they try to achieve their goal they lured Ultras Ace and Taro into a trap in order to blackmail Ultraman Mebius into going in to the Valley of Flames in his Mebius Burning Brave form. Mechazam, who Mebius meet minutes before and had saved Mebius before this, and wanted to understand why Mebius would risk his live to save "comrades" and goes with Mebius into the Valley of Flames to retrieve the Giga Battlenizer. Seconds after entering they are confronted by EX Zetton. After a short scuffle with the guardian, Mechazam and Mebius were able to retrieve the Giga Battlenizer and destroy Zetton but the mechanical being sacrificed himself to save Mebius from a falling magma. Mebius then took Mechazam back to the surface, they were then attacked by the Dark Four Heavenly Kings, and Ultraman Hikari (whom had seemingly betrayed them earlier). Mechazam then died due to his wounds but was revived by Alien Mefilas, who reawakened his true potential as Ghost Rebirth.

When all seemed lost Hikari freed Ace and Taro revealing he "betrayed" the Inter Galactic Defense Force to get close enough to the Dark Four Heavenly Kings so Mebius would have an ally when the time was right together the four Ultras defeat the Dark Four Heavenly Kings, but Ghost Rebirth was still active after a long struggle until Mechazam's true programming resurfaces. A dying Mefilas took this chance to shove the Giga Battlenizer, starting the revival process. What left of the real Mechazam begged Ultraman Mebius to destroy him so Empera would never return. Followed by the explosion of the Burning Mebium Dynamite, Mechazam's Sword Zamber left intact, standing still as if it was his own grave marker. 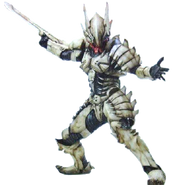