Mechagiras was a robot built by the Bam aliens to attack Earth. After Takeshi was captured, and furthermore, unable to transform into Ultraman 80 because of a machine built by the aliens, Mechagiras was sent to assault the city, firing its arsenal on the city, and not even U.G.M’s assault team could damage the robot.

Once Takeshi had escaped and destroyed the machine that prevented him from calling forth 80, Mechagiras was again let loose. Ultraman 80 appear and clashed with the machine, but its energy shield prevented the Earth’s hero from touching him, and its missiles quickly floored 80. The hero managed to find a way around the shield, however, and flew into the air and circled the robot, firing bolts of energy into it from all sides.

As Mechagiras was damaged, Ultraman 80 lifted the robot out of the Fourth Dimension and finished off the machine with his Succium Beam, destroying Mechagiras and the Alien Bam. 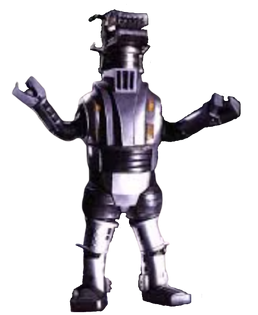 The first known figure of Mechagiras was released by Popy in 1980 as part of the "King Zaurus" toyline. It has about four rotating parts and stands at approximately 6-7 inches in height. Its detail and paint job are incredibly show-accurate, especially for being a much older figure. Unfortunately, this figure of Mechagiras has fallen into obscurity and has become extremely rare over the last few decades, being an extremely elusive and expensive figure with its vintage status.

In more recent years, another figure of Mechagiras was created by a lesser known brand called MARRS. The figure is made in a "chibi" style and is much less show-accurate than Popy's as they were trying to go for a much "cuter" design with the figure. It's somewhat common in stores in Japan, but is still somewhat of an obscurity in other countries.

Figure of Mechagiras, by MARRS. 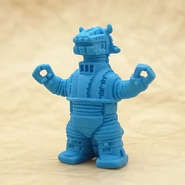 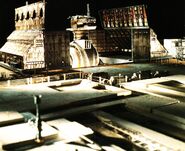 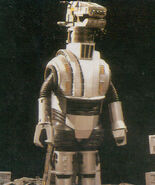 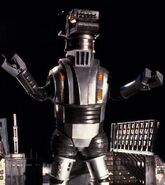 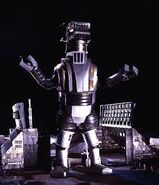 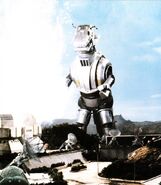 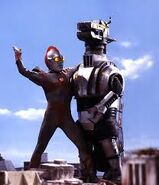