Mecha Musashin was a robot monster placed on the Earth by Ignis. He deployed it as a distraction against Kengo Manaka and Akito Hijiri while he was at the Eternity Core with Yuna Shizuma. Musashin would not appear unless a certain conspicuous button was pressed and, for some reason, Kengo's curiosity got the better of him and led him to push it despite Akito's advice and a note from Ignis warning not to do so.

Musashin came rolling into the battlefield with its umbrella weapon, and started blasting at Akito and Kengo. Kengo transformed into Ultraman Trigger to fight against the robot monster so that Akito can get to Yuna's position. Trigger disarmed Musashin, and then it took out a katana. In response, Trigger changed into Glitter Trigger Eternity and used the Glitter Blade to counter the monster's blade, but Musashin unleashed several other attacks that knocked Trigger down. The Nursedessei shot at Musashin with the Maxima Nurse Cannon, forcing it to put up a barrier. Trigger took the chance to slice Musashin's arms off using its own katana, leaving it vulnerable to the Maxima Nurse Cannon, which destroyed it. 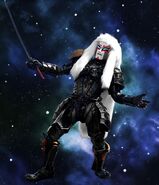