When Reimon from an alternate universe was captured by the Alien Salome, his Neo Battlenizer was confiscated and modified by their technology, creating Mecha Gomora as a result. 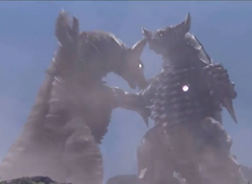 In part one of the special, when Rei of the ZAP SPACY encounters Mecha Gomora, he sent out his Gomora to do battle. However, Mecha Gomora proved to be a challenge for Gomora, and so the mechanical double easily overpowers Gomora. Shortly afterwards, Ultraman Zero arrives, saving the ZAP SPACY, and battles Mecha Gomora himself. The tides turn to Zero's favor, as his own strength is enough to hold back Mecha Gomora on his own, destroying one of his head crest, horns, and both of his claws with his Zero Sluggers. Soon, Zero is confronted by the Imitation Ultra Brothers, and Mecha Gomora is called back for repairs, but not after taking out both Rei and Litra in the crossfire.

In part two of the special, when Rei's Gomora attacks the Salome base, Mecha Gomora is repaired and unleashed to fight Gomora again. Much like last time, Mecha Gomora has the upper hand physically and beasts down Gomora with ease. The situation heightens when Darklops Zero appears and calls Mecha Gomora to help him double-team Rei's Gomora. Luckily, Ultraman Zero returns from battling the Imitation Ultra Brothers and teams-up with Gomora to even the odds. With the help of both Reimons, Mecha Gomora is soon scrapped by Gomora. Ultra Galaxy Legend Gaiden: Ultraman Zero vs. Darklops Zero

Mecha Gomora appeared in the second theater special. He was the twentith monster UltraLived by the Livepad. He fought against Gomora, Reionic Burst Gomora, and EX Gomora. All four of them seemed even in power until Mecha Gomora fired his weapons at the three organic Gomoras. He fired his Crasher Mega at Reionic Burst Gomora, his missiles at Gomora, and his Mega Super Oscillatory Wave at EX Gomora. That's when the rest of the three Gomoras decided to team up against the mechanical menace. They defeated him by beating him down and pulling out his tail. Ultraman Ginga Theater Special: Ultra Monster ☆ Hero Battle Royale!

Sold to the Gua Army by Alien Markind (before he was shot dead by Alien Shaplay), Mecha Gomora's Spark Doll was reanimated to its true form by Gina Spectre to attack a factory and act as a diversion to Xio and UPG members while Mold attacked their base. Fighting Mecha Gomora was the Sky Musketty and Cyber Gomora that was controlled by Asuna. Finally, it was taken down by the combination of Cyber Super Oscillatory Wave and Ultlaser. The Shining Sky, and the Land Beneath It

In the final episode of Ultraman X, after Greeza destroyed the Xio base, Mecha Gomora's Spark Doll was absorbed by Greeza. After speaking out to Gomora and striking Greeza right in the center of his chest, Mecha Gomora, along with all of the other Spark Dolls, traveled to X and united with him. Cyber Mecha Gomora's power was used to help form the Hybrid Armor and power up the Ultimate Xanadium to defeat Greeza once and for all. Mecha Gomora, along with the numerous other Cyber Cards and Spark Dolls, then appeared and thanked Daichi as he thanked them. The Rainbow Land

Mecha Gomora appeared in this mini-series where his spirit was summoned by Reibatos to help Juda Spectre finish off Ultraman Zero. But just as the mechanical Gomora launched his Knuckle Chains at Zero, Ultraman Orb appeared in his Lightning Attacker form just in the nick of time and knocked away the attack. With that trouble taken care of, Zero broke free and Orb gave Juda an electricity-infused punch to the chest. Zero then continued fighting Juda while Orb started to fight Mecha Gomora. Even though the Ultras held the upper hand against their enemies, their effects seemed to have no effect on them, and thus, the two decided to power up and so, Orb transformed into his Orb Trinity form and Zero transformed into Ultimate Zero to even the odds.

As Orb Trinity, the Ultra effortlessly dominated over Gomora's doppelganger via his Orb Slasher attacks and his close combat prowess and then Orb, alongside Zero, defeated both Mecha Gomora and Juda with a combination of the former's Trinitium Break and the latter's Sword Ray Ultimate Zero. The two evildoers then exploded and disappeared, possibly to return back to their resting places. Ultra Fight Orb

"Mecha Gomora, go and bring the end mark to him."

―Kei as he summons Mecha Gomora.

Mecha Gomora reappeared in episode 19 of Ultraman Geed where he was summoned by a recently rejuvenated Kei Fukuide via a Kaiju Capsule and a Riser and took control of RE.M. in her android form so that she can be used to control the robot. Afterwards, he sent Mecha Gomora on a rampage on the countryside near the underground base he was in at the time until he was confronted by Ultraman Geed.

While in his Primitive form, Geed did his best to fight the robot, but the latter kept overpowering him due to the fact that RE.M has watched all of Geed's battles and knows all of his every moves. Geed then switched into his Acro Smasher form where he managed to block and dodge some of his attacks, but Mecha Gomora still held the advantage over the Ultra. Geed then recovered after falling down and went after Mecha Gomora while jumping on his new energy disc attacks, but when he jumped up, he was sent crashing into the ground again by the robot's Knuckle Chain, but Geed didn't give up and convinced RE.M to fight back against Kei's control which she eventually did and managed to kick Kei out of the base after escaping Mecha Gomora.

With that ordeal behind them, RE.M told Riku to target Mecha Gomora's neck and so Geed transformed into his Royal Megamaster form and drastically turned the tide of the fight in his favor by striking him at his weak spot and even managed to use his King Sword to block Mecha Gomora's Crasher Mega. After getting in one more sword slash at him at the neck, Geed used Ultraman's Ultra Capsule in conjunction with his King Sword to launch a Spacium Flasher at Mecha Gomora, which resulted in the robot's destruction.

Mecha Gomora was first seen fighting both Ultraman Rosso and Ultraman Blu to test their skills and teamwork as their battle was watched by the robot's summoner, Makoto Aizen. While the robot managed to get in a few hits and dodged some attacks, he was overwhelmed by their teamwork and Makoto turned Mecha Gomora back into a Kaiju Crystal via a puff of smoke, resulting in Blu unintentionally hitting Rosso. Afterwards, the Kaiju Crystal was picked up by D.R.L.N..

Mecha Gomora reappeared soon after Makoto ran into the brothers' childhood rival, Kaoru Komaki. The two brothers transformed into their Ultra forms soon after and when the mecha appeared unresponsive at first, Rosso fired a Fire Bomb at Mecha Gomora which landed a direct hit but still remained unresponsive. Mecha Gomora then powered on after the brothers found out Kaoru was inside the mecha then launched its Crasher Mega at the Ultras as well as the rest of the city until Rosso managed to stop it with a fire infused punch which Blu followed up with his Aqua Jet Blast which knocked down Mecha Gomora, but hurt Kaoru in the process. During the fight, Kaoru encouraged the brothers to keep fighting by telling them important lessons they learned from their childhood.

After dodging his Mega Finger Missile, the two Ultras decided to switch forms. With the form change, Rosso trapped Mecha Gomora in a Splash Bomb, but just as he brought out his R/B Slugger Rosso, the mecha broke free and hit him with a point blank Mega Super Oscillatory Wave after he disarmed his Sluggers and later attacked them both with his Knuckle Chain. After hearing some more words of encouragement from Kaoru, Rosso switched into his Wind form for the first time.

With his new form, Rosso pushed Mecha Gomora away with his Storm Flicker, but the mecha held on with his chain claws and cancelled out the attack with his Mega Super Oscillatory Wave, then used the same chain claws to grab him by the neck and moved him away. Enraged by it, Blu summoned his R/B Slugger Blu and used Ultraseven's R/B Crystal power to perform the Wide Shot Slugger which destroyed Mecha Gomora and Kaoru was saved at the last minute by Rosso's Wind Bubble, and Mecha Gomora's Kaiju Crystal was reclaimed once again. Longtime Enemy! The Finisher Fist of Elder Sister

Mecha Gomora reappears as Mecha Gomora (Custom Heavy) (メカゴモラ（カスタムヘビー） Meka Gomora Kasutamu Hebī)). Like the first incarnation, it was built by Alien Salome based on their research on Mecha Gomora, but this model was tuned up by an unknown individual, with its capabilities boosted up to its maximum potential.[1]

The Mecha Gomora was rampaging in the Hostar 21 Star System, terrorizing many Pigmon that fled it. To test Katsumi Minato's identity and desires, Ultraman Tregear showed him this scene. Succumbing to Tregear's temptations, Katsumi transformed into Ultraman Rosso and allowed Tregear to transport him to the planet Mecha Gomora was on. Rosso slashed at Mecha Gomora using his R/B Slugger Rosso before using the Orb Ring NEO, easily finishing it off with the Zettcium Beam. Ultraman R/B The Movie: Select! The Crystal of Bond 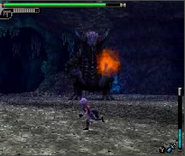 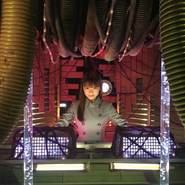 A Mecha Gomora Spark Doll was obtained by an Alien Markind before Ultraman X, and was later sold to the Gua Siblings, but was later backstabbed. Xio claimed it after its defeat. 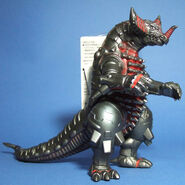