Ultraman Ace episode 24 "Look! A Giant Transformation in the Middle of the Night"

Mazaron Man (マザロン人 Mazaron Jin), also known as Mazaronian[1], was a Terrible-Monster from episode 24 of Ultraman Ace. An agent of Yapool, Mazaron Man oversaw Yapool's plan to use Yojo to unleash Mazarius, and ultimately held control over both. Fortunately, Mazaron Man was thwarted by Ace during a climactic battle in the depths of Mount Fuji that concluded with Mazaron Man's demise, while Yojo was reverted to normal, causing Mazarius to vanish. Despite Mazaron Man's death, his soul lived on, and was utilised by Yapool as one of Jumbo King's components.

In order to create a new Terrible-Monster, Yapool targeted Kenta's pregnant mother, Yoshiko and pretended himself to be Kenta's faraway father to mail him a red gemstone as a gift, which was actually a piece of Yapool's destroyed body that had spread throughout the universe. Mazaron Man, in disguise of old man, manifested himself out of his hatred towards Ace and summoned a red rain via the red gemstone in the boy's possession, causing his mother to slowly transform into Yojo. Mazaron Man later built a hideout in Mt. Fuji, and instructed Yojo to perform a ritual to make her gave birth to Mazarius. However, she was returned to normal thanks to TAC and Kenta's interference. Mazaron Man was angered as his volcano hideout erupted. Hokuto and Minami went to the volcano, and together transformed into Ace. Ace flew into the erupting heart of Mt. Fuji. The fight was vicious, and Mazaron Man tried to burn Ace in the rising lava, and even attempted to rip his legs off. However, Ace was eventually victorious. Look! A Giant Transformation in the Middle of the Night

In the final episode of Ace, Mazaron Man, along with Unitang, Cowra, and Mazarius returned as ghosts, and combined into the strongest, final Terrible-Monster Jumbo King by Yapool. Tomorrow's Ace Is You! 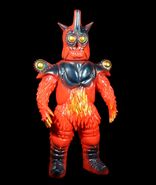 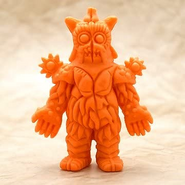 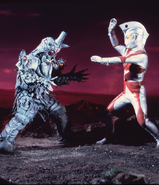