"All of you, you're just crushing our hopes!"

―Captain Hiura yelling at JADF Soldiers, after they killed Mazalgas.

Mazalgas (マザルガス Mazarugasu) is a pitcher plant-like Kaiju that appeared in the TV series, Ultraman Cosmos. He was later possessed by the Chaos Organism and becomes Chaos Mazalgas (カオスマザルガス Kaosu Mazarugasu). He appeared in episode 51.

A monster that hails from space, Mazalgas arrived on Earth as a meteor. As it crashed, Chaos Organism appeared and tried to control the creature, but absorbs it, revealing to be Chaos Header's natural enemy. Back and forth, Mazalgas appears in random places and having short battles with Chaos Organism. During these battles, EYES and the Japanese Self Defense Force are arguing of whether to kill Mazalgas or let him live because of him fighting Chaos Organism. EYES wants Mazalgas to live so Cosmos can make be used for good and the SDF wants him dead since he's a monster. Soon enough, Mazalgas starts threatening humans and starts to try and kill them, until Ultraman Cosmos comes onto the scene and the two giants fight. However, during their fight, the soldiers fire their missile into Mazalgas, weakening the monster and giving the undigested Chaos Organisms a chance to escape and possesses Mazalgas, thus transforming him into Chaos Mazalgas. Afterwards, cosmos goes into Corona Mode then goes into Eclipse Mode and has the advantage against the monster. He manages to beat Chaos Mazalgas into submission, and attempts to purify them again, but the wounds they sustained in battle, both against Cosmos and the J.S.D.F., were too great, and the monster died. 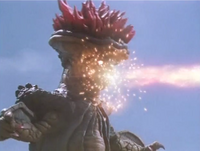 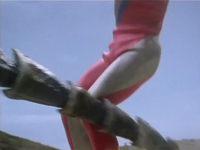 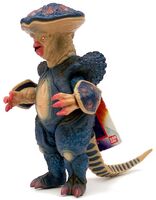 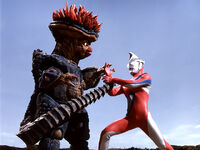 Ultraman Cosmos vs Mazalgas
Community content is available under CC-BY-SA unless otherwise noted.