Mirei Shimizu
Mayu Igaguri (伊賀栗マユ Igaguri Mayu) is one of the side characters in Ultraman Geed. She is the daughter of Leito and Lumina.

Mayu first appeared in the series after woken up from her sleep after Leito/Zero was helping Lumina to pick a plate which is about to fall to the ground. Mayu then reaches her arms to her father as he has just returned home from work. Salaryman Zero

When Zero was "dead" after sacrificing himself to save Kei's audience from a Galactron, while packing up, Leito hug both Lumina and Mayu to leave the house while Leito tries the best he could do to save them and the world. Mayu then run towards Leito and hug him after Leito's battle with a Galactron after Zero revives. Going Beyond Fate

Mayu was later found to possess a Little Star, which allows her to teleport from one place to another. Mayu was later tasked by Leito to stay in the Nebula House with Pega to be safe. However, Mayu teleported away from the place despite Pega's efforts to keep her there and went to the place where Leito/Zero and Geed/Riku was fighting Skull Gomora and Tyrant to find Laiha which she did. However, Laiha told her to wait there as she went on to settle her feuds with Kei. Mayu then pleaded Riku/Geed to save Laiha and has her Little Star transferred to Geed, which formed Zero's capsule. Leito and Riku went to find Mayu after the battle, the three of them then went to search for Laiha. After Kei escapes, Mayu embraces Laiha after she was saddened by the loss of her parents and unable to finish Kei off. The Sword of an Oath

Mayu was tasked by Lumina to practice locking up the house door while Lumina was discussing with her friends about Star Bem Gyeron. After the said Kaiju's remains fell over the place on one particular day, Mayu collected it and believing it is a "beautiful gem". When it melted, Mayu put it into the fridge which allows Moa to figure out a way to prevent the Kaiju from regenerating after its destruction. When Lumina knew about this, she warned Mayu not to collect any foreign objects she found outside. The 10:00 AM Monster Bird

Mayu was celebrating her birthday with her parents. After Leito was about to go and commence the battle with Belial Atrocious, Lumina and Mayu wished Leito good luck. The Fragments of Hope When Leito was hospitalized when Zero was critically injured, Mayu and Lumina went to the hospital where Leito is being sent to and stay by Leito's side until his recovery. Sometime later, Mayu meet Zero with her parents and biding farewell to the Ultra and left via the restored Ultimate Aegis. The Symbol of Geed 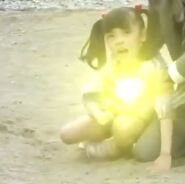