Mirrorman episode 37 "Cast Into The Sun"
Mayasaurus (マヤザウルス Mayazaurusu) was a Kaiju partner to Gorgosaurus that appeared in the series, Mirrorman.

Mayasaurus appeared in episodes 29 and 30 of Mirrorman.

Mayasaurus was sent to Earth by the Invaders together with his brother, Gorgosaurus, to carry out the Jumbo Phoenix destruction strategy. Mirrorman appeared to rescue the Jumbo Phoenix when Gorgosaurus attacked. Mayasaurus arrived to the battle and attacked Mirrorman with his radiation fog before retreating himself. After Gorgosaurus was killed and Jumbo Phoenix escaped the immediate thirty kilometer radius was fenced off from the public due to the destructive radiation left by Mayasaurus. The monster proceeded to fly around that night spraying radioactive fog wherever he could. At one point Kyotaro was tied at his ankles over a cliff for Mayasaurus to finish the job. Before the monster could kill him, he used Mayasaurus's right eye to transform, irritating him. This allowed an Invader trap to shackle him to the area until the energy time bomb could activate.

The next morning the SGM detected Mirrorman in trouble and launched the Jumbo Phoenix to save him. The monster returned to beat up the hero just the SGM arrived on the scene. Jumbo Phoenix separated and unleashed its missiles on Mayasaurus which knocked him down. The Invaders told SGM via radio they would exchange Mirrorman for the Jumbo Phoenix or the hero would be shocked with 20,000 volts of electricity, even revealing the energy time bomb within him. SGM stopped their fire and Mayasaurus continued his one sided attack on the defenseless hero until the chains on his ankle shackles broke, allowing him to kick the monster down. His wrist shackles' chains were soon destroyed by SGM, allowing Mirrorman to fight once more with the ship carrying the chains being shot down right after. Mirrorman used the Mirror Knife on Mayasaurus's wings to prevent him from flying off. After a quick assault, Mirrorman ended the fight with the Mirror Kick to decapitate Mayasaurus just like his brother.

Mayasaurus β was the brother of the original. After Pair-Mons King β and Gorgosaurus β were slain, Mayasaurus β flew to the scene to fight Mirrorman and like his brother quickly used radioactive fog from his mouth. After a kick and a stomp, Mayasaurus β grabbed Mirrorman and dropped him from over a kilometer in the air. The monster roared in victory at the defeated hero beneath his feet as a boy named Yoshio watched in disbelief. Later, the Invaders trapped Mirrorman in a giant rocket at an abandoned scientific university base. The rocket launched before SGM could arrive. Jumbo Phoenix attempted to pursue the rocket, but Mayasaurus β flew in to stop them. After the Rocket left Earth's orbit the Invaders revealed it was heading toward the sun.

This plan failed thanks to Androsaurus and Androsaurus Junior breaking the glass on the rocket. Once Mirrorman returned to Earth the Invaders managed to corner Kyotaro on a bridge. Mayasaurus β was sent to this bridge to help finish him off. Kyotaro managed to become Mirrorman using the river below and kicked the monster down. Mayasaurus β eventually got up and charged at Mirrorman only for the hero to flip over and kill him with the Silver Cross, splitting the monster in half. 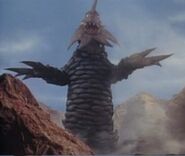