Still in use
The Maxium Sword (マクシウムソード Makushiumu Sōdo) is a Slugger used by Ultraman Max and it is stored at his crest when not in use. It is similar to Ultraseven's Eye Slugger.

The blade's name comes from its owner, Ultraman Max and the fact that it serves as a blade. Thus Maxium Sword.

Like all Sluggers, the Maxium Sword is stored on the user's head as a crest. It can be thrown and controlled mentally and cut through even dense objects. Like others, it can be used in hand-to-hand combat, but can also fire light bullet at an enemy and act as a defense against enemy energy attacks.

Unlike others, it seems to have the natural ability to multiply itself, each copy under the user's mental control.

Maxium Sword Cloning Shoot
Add a photo to this gallery 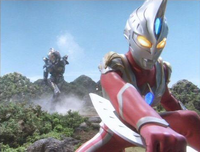 Maxium Sword in use
Add a photo to this gallery

Retrieved from "https://ultra.fandom.com/wiki/Maxium_Sword?oldid=511631"
Community content is available under CC-BY-SA unless otherwise noted.