Still in Use
Max Galaxy (マックスギャラクシー Makkusu Gyarakushī) is a bracer used by Ultraman Max, delivered to him by his superior, Ultraman Xenon. Max puts the Max Galaxy on his right arm, summoned by raising his left arm up. Max primarily uses the Galaxy to turn the tide of battle when an opponent begins to wear him down. With the Max Galaxy equipped, he can fire the powerful Galaxy Cannon.

Originally owned by Ultraman Xenon, it was given to Ultraman Max during the battle with Zetton. Since then Max has used it in various battles.

When Max was defeated, the Max Galaxy was used by DASH to recharge solar energy and revive him. Kaito joined with the object in the middle of delivering it to merge with the fossilized Max. Upon his revival, Max used all of the powers in the Max Galaxy and utilized a larger Galaxy Sword to defeat Giga Berseke.

Max lends Ultraman X a portion of his powers (in the form of a Cyber Card) after they defeated Alien Sran and Zetton. 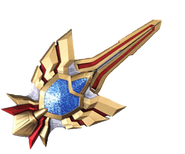