Any size at will

Any size at will

A genie who lived inside a dusty vase, Marjin was discovered by a group of children, who released him from his home. In gratitude, the being allowed the three kids three wishes, as thanks for helping him. The children's first wish was to have Marjin clean up all the garbage from their city home and indeed, Marjin granted their wish by cleaning up all the garbage in the city before returning back to his vase. Sometime later, the pot was stolen by three bully boys who wanted to use Marjin's magic to create a monster. After some brainstorming from the boys, Marjin was summoned yet again and granted the boys' wish to bring the monster Red King, back to life. Marjin easily granted the wish for the boys before retreating back to the jar but had also endangered the boys as he did not realize how destructive Red King truly was. During Red King rampage, Marjin's jar was broken and Marjin reappeared. He used his powers to give the boys a final unexpected wish as he gave the city a dusting of snow. He then reminded the kids to treasure the beauty of Earth, before departing, having seemingly been set free. 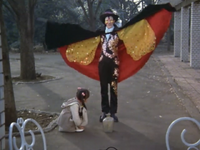