"I promise that I will become a strong person."

Ai Saikawa
Marina Kazama (カザマ・マリナ Kazama Marina) is a main character in the Ultraman Mebius TV series. She is a member of GUYS and serves as a pilot due to super human level of hearing.

She is a former motorcycle racer with dreams of becoming one of the first internationally-known women in the sport. She had a supervisor named Kadokura. She still tries to keep up with her practices and team while also being a member of GUYS. She seems like the older sister of the group and tends to look after the other members a lot, George in particular (she appeared to be jealous when he was dancing with professor Fujisawa in episode 25). She has outstanding hearing and catches the smallest sounds from machines. This hurts her ability to race, as it prevents her from pushing her machine to its limit. She has two younger brothers. Perhaps due to her hearing, Seiji Hokuto/Ultraman Ace was able to contact her alone in episodes 44 and 50. Marina won the motorcycle world championship after episode 50.

In episode 23, Marina was trapped in in the past by Chronorm. Marina, Mirai and an Alien Angel named Tori, were at the location of her summer vacation during 1999. It was during an event she could not remember. When she saw herself as a child played in field, she remembered that actually she was being saved by Tori. Later, when Chronorm was defeated, he assured the younger Marina that it was all a dream, causing her to eventually forget about the incident. 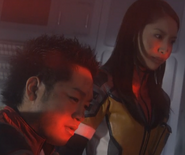