None
Maricula (マリキュラ Marikyura) are marimos (seaweed/algae balls) that mutated after a cosmic ray meteor entered their lake. After Super GUTS' interference, all the lifeforms combined into a larger form, but was destroyed by Ultraman Dyna.

Maricula's name were combined from the word Marimo (their original form) and Dracula (due to their fondness of bloods).

​Originally Marimo that grown on Taba Ryo lake, these seaweed balls were mutated after a cosmic ray meteor crashed into their lake. Nakajima, a Super GUTS member happened to be at the lake during his day off, wanting to fish, and saw him land. He alerted his teammates to the landing, but they decided to monitor things until the situation changed. Maricula began feeding on fish in the lake, growing larger but quite a few were captured by TPC forces while a legion of larger ones emerged from beneath the lake to hunt. One of the captive ones opened up before the Super GUTS’ member’s eyes but before he could alert anyone to it, it ether escaped the tank or returned to its ball form and wasn’t believed. Asuka soon arrived with several other Super GUTS members to help investigate. As they did so, the Maricula from the lake entered the tent where their captive brethren were located while scans of the ‘balls’ revealed there was far more to them inside. As they were examined, one of the creatures frightened a man by opening up them attached to his throat, draining him of blood. The creatures soon attacked the lab, killing all the scientists inside. As the lead one returned, he found the place covered in the strange creatures. He found one man still alive but after handing over important information, the man died. The scientist managed to escape the lab as the hordes of creatures attacked him. Luckily, he ran into Asuka and company. He quickly explained what was going on and how dangerous they were. They managed to rescue their friend from the blood sucking creatures, then returned to the lab, finding the hordes of Maricula Parasites gone. Back in the lake, something called to the creatures, causing them to swarm back into the lake and recombine into the massive Maricula Spawner. While that was happening, the swarms of parasites swarmed over their car. But as they tried to remove them, Maricula called once more, summoning them back to it until finally, he was reformed.

Later, the monster reformed back and erupted from the lake. Super GUTS arrived to attack but the creature merely ate their lasers, then used her tentacles and acid to fight back, downing one of their ships. Asuka tried to fire on them, only for it to eat their lasers and spit fireballs at them. As their car was destroyed, Asuka and his friend escaped but where blasted away by the explosion. Asuka chose to become Dyna and attacked Maricula. After kicking it and cause it to go into a ball, Dyna started kicking Maricula around like a soccer ball, finally jumping into the air a spiking the space monster down. But as he launched another kick, the monster bit down on his foot and then blasted him with his fire balls before tieing him up with his tentacles and shocking him. Dyna’s timer started blinking but a weakness in Maricula was discovered, his energy core. Super GUTS shot it, stunning Maricula in pain. Dyna took the opportunity to break free and switch to Strong Type, kicking it high into the air, causing Maricula to change back to ball form. On its way down, Dyna head-butted it, driving it hard into the ground, then kicked it around. Maricula uncurled and tried his tendrils but Dyna caught them and spun the creature around him with his strength before throwing it. Maricula tried his fireballs, only for them to be absorbed as Dyna charged the Gulnate Bomber. The powerful blast of energy struck Maricula, who with his energy core was destroyed could no longer consume it and was blown to bits in a huge explosion, ending the bizarre beast’s assault. 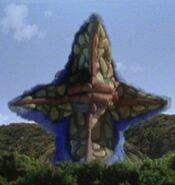 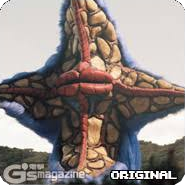