Ultraman 80 episode 50 "Ah! The Giraffes and Elephants Turned to Ice!!"

Ultraman R/B Novel: The Blue-Eyed Girl Whose Name is Gray
Margodon (マーゴドン Māgodon)[1] is a mastodon-like Kaiju who appears in the final episode of Ultraman 80.

A star freezing alien intent on an assault against humanity was the monster Margodon. Once Margodon came to Tokyo, the mammoth-like monster used his icy mist to cover a large portion of the city in ice. As UGM was about to head out the crew told Takeshi and Ryoko that they knew their secret identities of Ultraman 80 and Yullian. With this in mind, UGM wanted to carry out this fight alone. Takeshi and Ryoko respected their decision, and UGM set off to attack Margodon with their secret weapon, a freezing gas. Once Margodon was shattered with a giant wrecking ball on one of UGM's fighters, Takeshi and Ryoko enjoyed their last day on Earth before turning back into 80 and Yullian and going home to Nebula M78. Ah! The Giraffes and Elephants Turned to Ice!!

The Blue-Eyed Girl Whose Name is Gray

In the R/B prequel novel, Margodon was summoned by Balsas Gang as they pursued the original Rosso, Blu, and Grigio up Crusader's Peak on O-50. Its purpose was meant to be a trump card in cold mountain regions. It led the charge up the perilous climb with an army of Balsas mercenaries following it, seeking to get revenge on the siblings for their rivals and boss. Due to not being able to take on the mammoth monster, their only option was to run away and protect their guide Frau.

Near the tip of the mountain, the three planned to sacrifice themselves fighting the army and letting Frau get away. She refused and stayed and as they went down, they met the Voice of Light. They showed it their R/B Gyros to which it awarded each an R/B Crystal for climbing its mighty summit. Ultraman Taro's crystal of Fire was given to Rosso, Ultraman Ginga's crystal of Water to Blu, and strangely the Demon crystal of Grigio Bone to Grigio. While the last was confused, they immediately used them all as if in sequence, the brothers becoming Ultras while Grigio became a monster. After their transformation, they trudged down the rocky path to finally confront their pursuers. Margodon had been waiting as if wanting to actually battle them to the death.

A great battle ensued between the frozen beast and the transformed siblings, the Balsas Gang mercenaries trying to assist their bioweapon. Despite the seemingly stacked odds, the heroes had the upper hand, the ultras using their flight capabilities and beams while Grigio warred more on the elemental grounds with fire against ice. Inevitably, the Margodon was taken down and destroyed along with the army, saving the siblings' lives without real sacrifice. 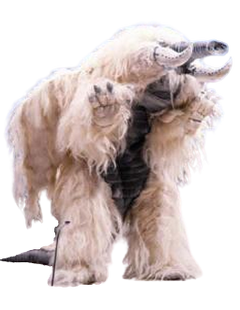 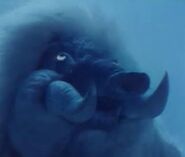 A frozen Margodon about to be destroyed 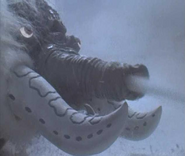